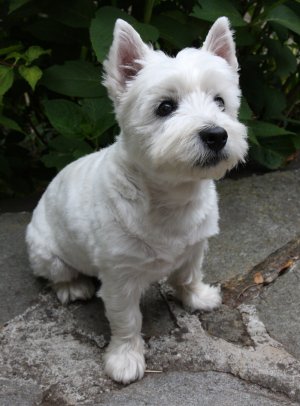 Darby has had a tough life and has been in six different homes in her eleven years, including her first two years as a “backyard breeder” in Washington state.  She had two litters of puppies and literally lived outside, even in the winter.  When she was finally “rescued” by her original breeder, her weight had dropped to twelve pounds and she had lost most of her fur due to the tough conditions.  This, unfortunately, set her up for health challenges in later life.  Darby has been in rescue three different times, first at Best Friends in Utah for three months, and now at San Francisco Bay Westie Rescue on two separate occasions.  Despite all those difficult times, she is a sweet girl without a mean streak in her little white body.  She has just been in the wrong place at the wrong time over and over again, and now it’s time that she finally has a break.

We were originally the transport volunteers who brought Darby from Chico, California, to her most recent owner in San Francisco four years ago.  When the latest owner decided she could not keep Darby due to life changes, we agreed to foster her on behalf of the San Francisco Bay Westie Club Rescue.  Our grumpy, almost fifteen-year-old Westie Fritz remembered her from the past and immediately yelped with joy when she entered our house.  This definitely made it easier to commit ourselves as foster guardians.

From discussions with her previous owner and an in-home examination with our own holistic veterinarian, we discovered Darby has a long list of physical ailments.  She is almost completely deaf due to recurrent ear infections and blind due to cataracts.  In addition, she has major dental tartar, a luxated patella on her rear right leg, and presented with a yeast infection in both ears and back paws.  We managed to get the yeast infection under control fairly quickly, although we will have to look at food allergy issues in the long term.  More importantly, our rescue chair, Mary Young, advised that we should address the cataract issue first, since it is particularly vexing for a Westie to lose two senses, visual and auditory, decreasing her quality of life significantly while also decreasing her adaptability.  Darby also arrived in rescue at the same time as a number of other senior westies in better health.

While hearing is an unlikely sense to recuperate, vision is probably more important and also possible to correct with cataract surgery.  Darby was reasonably good at discerning light/dark shapes, but unable to make out details, and constantly ran afoul of branches, windows, etc.  She had become wily at following her humans, mainly with her nose, but you could see that she lacked confidence in the way she walked and didn’t like to be left alone.  We made an appointment to see Dr. Gwendolyn Lynch, a canine ophthalmologist at Veterinary Vision in San Francisco.  She determined that Darby had a good prognosis despite having very mature cataracts — an 80% chance of full recovery of her eyesight with cataract surgery.  Nevertheless, there were some dangers of damaged retinas and of developing glaucoma immediately after the surgery.  With cataract surgery costing upwards of $3000, even with a rescue discount, we contacted WestieMed for help.

Leading up to the surgery, we had a one-week regimen of various eye drops.  Darby has been very patient with the eye drops, motivated by small treats and her continually ravenous appetite, probably caused by deprivation as a young dog.

Darby had her surgery yesterday and did very well.  The surgery was performed using a modern technique called “phacoemulsification” where the cloudy lens is removed and an artificial lens put in its place.  Her retinas ended up being in relatively good shape, and her pressure numbers remained in the good range after the surgery.

In the afternoon after the surgery, even groggy from general anesthetic and wearing a dreaded e-collar, she had a great appetite and finished her dinner as well as Fritz’s leftovers.  Early this morning we were back at the ophthalmologist to check her eye pressure numbers to make sure we weren’t in danger of glaucoma, and it looks like she will be totally fine.  She was given another injection in her eyes and we were sent on our way.  For the next week, we will be on a routine of two oral medications and five different eye drops, three times a day.  This routine requires dedication by both the patient and the guardian, and I think we are up to the task.

In the meantime, we are taking Darby and Fritz on daily walks to the Boulange de Cole Valley, our local French bakery, where they enjoy a little treat while we enjoy our jasmine tea.  Although Darby will need to wear an e-collar for two weeks, she already has a more confident spring in her step and a different way of viewing the world.  Where I felt that before she was looking out trying to figure out what was going on, I think that now she is looking out surprised at the detailed fabric of life.  Even though the eye drop and ointment residue, she already seems more bright-eyed and curious.

A big thank-you to WestieMed and the local San Francisco Bay West Highland White Terrier Club Rescue for helping Darby out with her cataract surgery.  It is amazing that there are such organizations in place that are interested in helping the less fortunate Westies among us.  Darby is such a fine girl and deserves a truly great last third of her life.  We will make sure she gets it.

I’m writing for Ineke with our happy update on Darby! Darby has been very happy and charming addition to our pack. She has helped our 16 1/4-year-old Westie (Fritz) march along in his senior years by keeping him moving. She occasionally takes on some of Fritz’s tasks like guarding in the back yard or from the front window. Her eyesight has been very good and we’ve been carefully following all the post-surgery eye care. Thanks again for making Darby’s and our lives better!