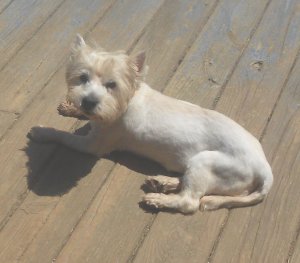 Robbie was found walking the streets of Baton Rouge, Louisiana by Animal Control and was taken to a high kill shelter.  No one knows how he got on the streets or how long he had been roaming them.  YELP BR pulled him from the high kill shelter and took him to a vet to get him checked out.  They gave Robbie all of his vaccinations and made sure he was healthy.  While in their care he weighed a healthy seventeen pounds.  On 4/2/12, Jennifer of YELP BR called me to say she had a Westie in their care as I had called a couple of months and introduced myself saying that whenever their shelter got in a Westie, I would be interested in making the drive to bring him to Alabama to adopt to some wonderful family.  Jennifer told me about this wonderful little boy and I raced to Louisiana to pick him up.  This was a good eight-hour drive one way.  I met Robbie that day around 3:30 pm and he was the best-mannered Westie I have seen in a long time.  For two weeks, Robbie was doing well as he was adjusting to his new surroundings, eating, playing with the other rescued Westies and was just being a Westie.  Then Robbie took a turn for the worse.  I had just gotten him groomed and when he came back, he started shivering and shaking and would not stop.  For a week I did not think anything of it but watched him with a wary eye as he would just take a couple of bites of food and then get sick.  The second week, he stopped eating entirely and I became alarmed.  He would vomit and the two spoonfuls of food would either come up by vomit or come out of his backside.  He went from 17 pounds. to 12.8 pounds and became very lethargic.  That Thursday, I took him up to my vet whereby he was diagnosed with Giardia and was given pills for his vomiting and diarrhea.  Robbie seemed to get better for two days and then he would slump right back into the same situation as before.

Robbie was dying right before my eyes and I was helpless in trying to figure out what was wrong with him.  I had spent close to $150 in food just to try to get him to eat as I thought he was just being picky.  The following Tuesday, I knew something was extremely wrong with Robbie so I rushed him to a vet that was close to my house.  They took one look at him and said that he was very dehydrated and he needed surgery immediately as there was something lodged in his stomach.  The vet bill would run me $845.00 and I did not have that type of money.  I am the President of Westie Rescue Alabama but I am so small that I don’t qualify for the donations that most rescue organizations get and I was petrified that I could not save him.  Then WestieMed, the guardian angel that they are, swooped in and saved Robbie.  As I was calling them and leaving them a message, I began to cry and I could not stop.  Lucy, head of WestieMed, called the vet’s office within ten minutes and authorized all the procedures that Robbie would need without blinking an eye.  She immediately authorized payment (WestieMed has board members and procedures they have to go through before authorizing the payment) and when I talked with her, she told me that there would still be two board members that needed to approve this but she did not see where there would be a problem.  She stayed on top of this and if it was not for her and her board members, Robbie would NOT be alive right now.  She called me every day and allayed my fears that Robbie was not going to pull through this.  She took her time answering my questions and just being a good friend to me while my rescue Robbie was at the vet.  He was hospitalized for five days and this past Saturday, May 12th, he came back to his foster home with a spring in his step, eating everything in sight, growling playfully at the other pups and just a very happy little boy. I want to take this time and although I am not good with words, I cannot thank WestieMed enough for stepping in and saving Robbie.  WestieMed and the caring individuals who make up this organization are angels on this earth who step in to help Westie rescues that need medical attention.  My words are not good enough of how I actually feel about this organization and they will have my undying gratitude and praise because, without them, little boys and girls just like Robbie don’t have a fighting chance.

It was found that Robbie did not have an obstruction in his abdomen, but had a very badly infected gallbladder which was adhered to the liver. He also had a very clogged bile duct which made it impossible to remove the gallbladder.  The gallbladder was drained, freed from the liver and the bile duct was opened as much as possible. Robbie was put on antibiotics and medication to help clear the “sludge” in the bile duct. He responded very well to the procedure and is recuperating and gaining weight.

Robbie was adopted a month after WestieMed saved his life. Robbie is a wonderful little boy! He is so sweet and winsome and loving.

He is very fond of his toys and his quiet time with us. Every day he takes a little walk but doesn’t like to get too far from home. The ladies next door love for him to visit.

He is no longer the tentative, spindly little fellow who arrived here. His coat is beautiful and we Baby Wipe him between groomings. Vet says he should not gain any more weight.  Sometimes he doesn’t eat, or delays eating and appear to feel under par. Then he just rests in his bed and we pet him and eventually, he dines. He is not throwing up at these times. He has thrown up maybe three times since he arrived. He has a normal bathroom pattern and has adapted perfectly to the schedule of outings. He’s a real gentleman! He has also adapted to sleeping in his own bed in the sunroom.

For a while, he seemed to have little panic attacks of accelerated breathing, but with time these have decreased. What has increased is the time he sits in our laps! He has one quirk,  though: He gets up and down from our laps rather than staying on our laps. Sometimes he also licks compulsively. He is losing his fear of men and particularly loves my brother Bryan. Although Robbie’s tail does not stand straight up, it wags a lot. When I come home from work he is at the door insisting upon an official greeting and barks if he does not get it! He is a good watchdog but does not bother barking at unimportant noises, thank God.

In short, this little boy has recovered his Westiehood!

Thank you for saving the life of this wonderful little boy.