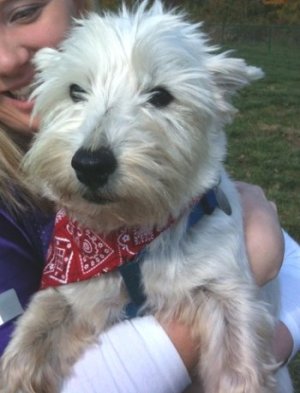 Dudley came into Westie Rescue of Tennessee’s (WRT) system in late August; pulled from a shelter in southern TN sadly known as a “dropping pen” for a backyard Westie breeder who dumps her breeder dogs when they no longer perform to her liking.  In fact, Dudley is the fifth Westie pulled from that shelter in the last year and a half.

A volunteer picked up and took Dudley straight to our vet partner in the Franklin, TN area and got all of his vetting, neutering, and a major dental done (he had to have nine teeth pulled – poor guy).  He also had a severe ear infection and issues with his skin that needed treatment.  He boarded at our vet for a week.  I then picked him up, took him to get groomed and then to meet his new foster mom half-way between Nashville and Chattanooga.  Kim and her husband are AWESOME foster parents, as they have three rescued Westie boys of their own, and Kim is a nurse in Chattanooga.  Kim and Jeff have cared for Dudley since Labor Day weekend.

We thought we had a great home lined up for Dudley with a semi-retired couple who live in Minnesota in the summer, and snowbird to Gulf Shores, AL for the winter.  However, either Dudley did not care for the woman when she picked him up or he was in pain from his hip that we were unaware of.  He bit her when she was trying to leash him up.  She gave it a valiant try, but she realized the two of them didn’t jive and ended up bringing him back to Kim in Chattanooga a few days later.

At this point, the WRT officers and Kim decided the next step needed to be an in-depth exam and x-rays to see if he had something physically making him “nippy”.  That’s when we found the hip issues.  One hip is fine, though a little bit arthritic, but the other had major issues and required surgery if he was to get back to normal.  Dr. Shulman, at Riverview Animal Hospital in Chattanooga, did a wonderful job on him Monday, and she said the surgery was a great success.  She believes his recovery rate to be close to 100%!  She is recommended he be kept on joint supplements, such as glucosamine and conjointine, as he goes through life.  The recovery rate is also fairly quick, so hopefully, he’ll be feeling great and ready for a new home in the next couple of months!

Dudley had such a rough time of things, even after coming to WRT.  We are forever indebted to WestieMed for financially assisting with his hip surgery!  Thankfully, he didn’t have to have a full hip replacement surgery, and after the surgery, the vet explained that it was fairly routine surgery.  After a couple of weeks of pretty severe pain, he began to pull out of it and starting moving his hip/leg quite well.  As you can see from the attached picture, he must be feeling pretty good since he’s lying “froggie style!”

It took us a couple of tries to get Dudley placed because he can be a pretty nasty (and quick!) nipper.  He is now living near Atlanta with Tom and Nancy Ross, a very Westie-savvy couple who are retired and have lots of time for Dudley.  They do continue to have some behavior problems with him, and thus, they have opted to get him into a program through the University of Georgia vet school to work on it.  Tom reported that the questionnaire alone was twenty-seven pages long, and they fully expect UGA to come back and say Dudley is fine, but that he and Nancy need therapy!

Thanks again so very much for once again providing help for one of our WRT doggies!

Dudley (aka “Dude”) is living forever with his foster family because he had two failed adoptions with a high amount of aggression at both.

This problem has been minimal for the Barnes’, so he will stay with them indefinitely and WRT will continue to help with is vet bills.