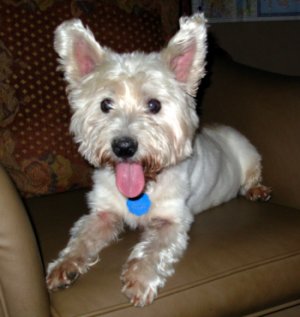 Josie was surrendered by her owner on August 25, 2009, due to loss of job and eventual loss of their home. At the time Josie was ten years old, was reportedly a “borderline” diabetic, and was on a special diet. Our rescue vet, Montrose Animal Hospital in Marietta, Georgia, quickly discovered that she had full-blown diabetes and immediately started her on an insulin regimen. Josie has received insulin injections twice a day since then. Over the years that Josie has been in foster care, she has had several crises that required hospitalizations and regulation of her insulin. She now has a thyroid condition and last year was diagnosed with Cushing’s Disease, both of which require medications. She has also become profoundly deaf. However, all of these setbacks combined cannot stop her from being a very active, loving, and happy little girl.

Josie had what was considered a cyst on her left shoulder. The vet, staff, and foster family all kept an eye on it. However, it became badly infected in September of this year. Our vet decided it would be best to remove the cyst. However, during surgery, he said that the margins started swelling, which to him was indicative of a mast cell tumor. He took very wide margins and stapled her back together. Her insulin was also regulated once again, and she stayed with the vet for several days. The invoice for this hospitalization was $1,880.40. With our vet’s courtesy discount of 20%, the invoice still came to $1,504.32, which put a definite strain on our rescue funds.

The outcome, however, is astounding as you can see from this photograph taken October 20, 2012. Josie is healing very well and has returned to her bubbly, curious self once again. Our appeal to WestieMed for assistance in paying this invoice is due to the fact that our rescue funds have been dangerously depleted. The Westies surrendered or rescued from shelters for the past couple of years are either seniors with health issues or young Westies requiring some type of surgery. (We currently have Josie with diabetes, Cushing’s, and thyroid disease, Sparky with Addison’s Disease, and Charlie in renal failure, all requiring constant attention, in addition to two young females requiring knee surgeries.) Thankfully, all of these rescues are with dedicated foster families who are doting on their needs and have been giving their financial assistance when possible. However generous our members and partners have been, we are not able to keep up with the need.

The assistance that we receive from WestieMed will assist us in moving forward with the rescue and rehabilitation of abandoned, neglected, and abused Westies.We are certainly very grateful to the Board of Directors of WestieMed for their love of the Westie breed and for their willingness to help.

Josie recently was diagnosed with congestive heart failure.  Of course, she hid it for so long that nothing could be done.  She was finally in so much pain that the decision was made to humanely euthanize Josie. Following is the foster dad’s note and a recent photograph attached.

“Josie wants everyone to know that she’s waiting at the Rainbow Bridge not only for us but for each and every one of you who gave such boundless love and dignity and support over the last four years. She maintained her zest for life to the end peacefully cradled in Jeannie’s arms. We, too, are grateful and thank you for allowing us the joy of knowing and caring for Josie. She was a very, very special little girl who will always have a big place in our hearts. Thank you.”