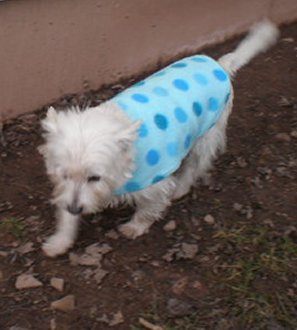 I received a call from a “concerned person” who told me about some westies that were in a backyard breeding facility in upstate New York. The lady said the owner had contacted her about giving the westies up to rescue because the facility was being closed. Their owner described JoJo as a small breeding westie in good health.

I drove several hours and met the lady who contacted me. She had JoJo and another westie. JoJo was indeed a tiny westie weighing in at just over eleven pounds. She said the “owner” told her JoJo might possibly be pregnant. JoJo was current on her rabies shot and needed updating on all other inoculations.

The following day I took JoJo to my vet and he confirmed the fact that she indeed was pregnant. He could see three maybe four shapes. He was not concerned about her being in distress as she was running around and playing with westies. She seemed in good health. He gave her an antibiotic and also a vitamin.

JoJo went to her foster home shortly after that. As the weeks went by JoJo got bigger and seemed to be fine. One day she began throwing up and was taken to her new vet. The foster Mom worked for this vet. She ate a piece of rawhide and a chunk got stuck in her throat. The vet tried several things and finally removed the rawhide.

However, he had to do an emergency C-section due to JoJo’s delicate condition. She and the puppies would die without the surgery. The surgery was a success and five puppies were born prematurely. Unfortunately, all the puppies died within a week. They were simply too early.

On March 3, 2012, JoJo went to her forever home. She had a vet checkup today. She has gained some weight and is doing well.

I adopted JoJo from Westie Rescue in Pittsburgh, PA.

JoJo is doing wonderful! Other than allergies she has no health problems. It’s just her and me and believes me she is quite spoiled, to say the least. She gets groomed every 8 weeks and has a wardrobe as large as mine! Her Steelers coat cost more than mine. LOL.

Thank you for helping JoJo, without WestieMed we would not be as happy as we are.