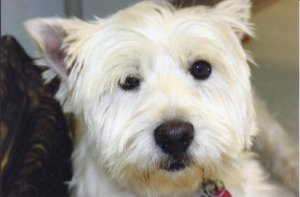 My husband and I are both animal lovers and have owned many dogs over the years.  We have had dogs of all sizes, various breeds, and two rescue dogs prior to Cody.

I first saw a Westie while visiting in England many years ago, long before they became popular in the USA.  Right away I was enamored by the breed and knew I wanted to own one someday.  In time we got a little female who is now thirteen years old as well as a little male who died this February just short of his tenth birthday.  Of all the dogs we have owned these two were by far our favorites.  I decided to wait a while before replacing the little guy we lost but I missed him so much I began looking online at some of the rescue groups and when I found Cody (then called Chaucer) my husband was really taken by him.  The next thing I knew we were being interviewed and I made the trip to Tulsa to adopt him.

We do not know Cody’s entire story.  He has been estimated as being between three to five years of age and he was one of eight dogs rescued from a puppy mill in Missouri where he was used for breeding purposes.  It was apparent he had lived in filthy conditions as his lower body and legs were stained where he had to lay in it.  He was also badly abused, withdrawn and obviously frightened by people but quickly bonded with me and does not willingly want me to be out of his sight.  He is responding well to TLC and we see improvements in him almost daily.

The rescue group’s vet had checked Cody out when they first got him and found him positive for hookworms and Cody was treated for them.  They also checked for heartworms but found him heartworm-free.  Immediately after adopting Cody I found him to be lethargic to the extreme, his eating was sporadic and he was throwing up a lot.  At first, I thought it was just stress-related but while vacationing in Colorado determined he needed to see a vet.  I took him to the vet we had used when we lived there and she diagnosed him as still having hookworms as well as heartworms.

We treated the hookworms again and he is now free of them.  The rescue group we adopted Cody from has provided us with Doxycyclene which he is now taking.  They also offered to give him the injections back to back and let me bring him home immediately but the cost of buying gas for the trip, motel costs and food becomes quite significant.  I have talked to our vet here in Fort Worth and feel it would be better for Cody to be treated locally and his treatment here would be more focused on Cody’s treatment and comfort and would give me a local contact in case of any problems.

I went online and read about some of the Westies that WestieMed had already helped and I was very impressed by the progress some of them have been able to make with WestieMed’s assistance.  Cody has allergy issues that we are addressing but they do not seem to be nearly as bad as some of these poor babies have had to endure.

I want to thank WestieMed for considering our request for financial assistance.  It is definitely our desire to get Cody well.  He has already made a lot of progress socially and we look forward to watching him evolve into a happy and more confident little guy as he learns to trust his surroundings.

Thank you for all of us Westie lovers for your commitment to giving so many a second chance for a good life!

You may recall he was rescued from a puppy mill and had been terribly abused. He has become my baby but continues to be afraid of men. He is making progress in his socialization though and loves playing with my son’s two dogs.

Healthwise Cody is in a very good place. He is heartworm free, eating well, getting plenty of exercise, his weight is at a good place and he seems to be a happy little boy.

Thank you so much for helping us with him and for giving him this second chance for a better life. If you have any specific questions let me know but meanwhile, everything seems to be going well for us at this time.