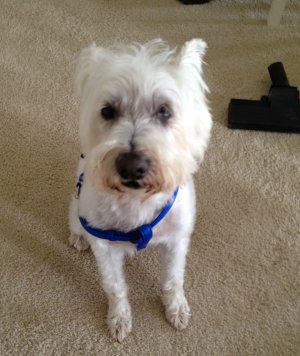 On February 27, 2012, we lost our beloved Schnauzer Gwen.  She was only ten years old when we lost her after two episodes of kidney failure.  Her loss was great for my husband and me.  She had filled our lives with much love and fun.

After about a month, we knew that we missed the companionship of a little dog very much and desired to rescue someone needing a home.  We spent the next month searching for a new friend.  We wanted a terrier of some type.  Westie Rescue of Maryland found what sounded like the perfect dog for us. He had been picked up in Prince George County in Maryland, taken to a shelter and then fostered in a home.

We thought we were getting a Schnauzer/Westie mix about four years old.  After getting our new friend, Sullivan, we found out he wasn’t exactly the dog we thought he was.  We thought Sullivan was four years old, had had two teeth removed and was being treated for an eye infection.   As it turned out, after speaking with the initial vet that had examined Sullivan after he had been rescued, he was closer to eight years old, had actually had fifteen teeth removed and was one week away from having his eye enucleated if the eye infection that he was being treated for didn’t clear up.

The following Monday, we took Sulli to our veterinarian who we have used for over ten years.  She met us in the lobby and immediately said, he’s got a bad looking eye.  Our vet confirmed the eight -ten year age and wanted us to see the eye specialist as soon as possible.  By the end of the week, we made the trip to see Dr. Corcoran, the ophthalmologist.

The ophthalmologist told us that the eye infection was so severe and the cornea so damaged that he actually had no vision in the eye. It’s difficult to know what caused this condition.  He either did not have an eye duct in the eye or the one he had didn’t work.  After years of neglect, the eye is like leather and in jeopardy of repeat infections and problems.  She recommended a $1200 surgery to remove the eye.  In the meantime, we took Sullivan home and continued on the antibiotic drops and the steroid drops twice a day.

After a week of contemplating how to proceed regarding the surgery, we decided it would be best to have the eye removed.  By this time, we were bonded to Sulli and he to us.  We felt we were handed a big bill for him, but then someone told me about WestieMed and how they might assist with the costs of his surgery.

The following week we took Sulli back to Dr. Corcoran, to have the eye removed.  However, she called me after putting him under anesthesia and said that upon viewing the eye, it seemed slightly better.  He seemed to have some peripheral light going into the eye.  She felt possibly getting the drops regularly and better nutrition might be helping.  She did not expect a complete reversal of the damage, but he could see light and dark in the eye.  So, we decided not to take the eye out.

Sulli, is a sweet, appreciative and loving little guy.  He has become very loyal to us and we to him.  He is good at expressing himself verbally too.  He has a low-level growl that he uses to get our attention; especially when he wants his head or belly rubbed.    The first time we had him groomed, he was so proud and felt so good, you could just see it in his walk. Sullivan loves taking walks and we easily cover two-three miles a day.  Sulli spent a good part of the summer in the mountains of NY at our camp.  He learned to smell, as he didn’t seem to have any interest in smelling when we first got him.  He loved chasing the chipmunks in our yard and going for boat rides.  He had no interest in swimming or getting in the water though!

While Sullivan still needs his eye drops twice a day, he is mostly cooperative about getting them. We need to continue the treatment for the next year and then once again be evaluated by Dr. Corcoran.  We wanted a younger dog, but he seems to keep up with our activities most of the time.  He is lucky in that my husband works out of the house and I am home much of the time.  He likes having someone with him.  He is a healthy boy and in spite of the rough time he had for a while, he is doing quite well now.

Thank you for your interest in Sullivan.
Mary Fitzgerald

Since I last wrote, we have had to take Sullivan to the vet for intestinal issues, but a change in diet has helped a lot.

Sullivan continues to get the eye drops and does alright with seeing most things. Some times his depth perception is off, but he manages.

Thank you again for your assistance with Sullivan and his vet bills.

Sulli just came from the groomer today and is quite handsome.  I don’t have a photo download right now, sorry.  Sullivan is doing well and is definitely my dog.  Try as he has, Sulli doesn’t want my husband near him if I am around.  This and his need to hoard over his food, make us believe he had a rough time in the past.

He is very comfortable and enjoys being with us at the lake we spend time at in the summer.

His left eye still gets drops twice a day, which seems to prevent the infections.  He is so good about getting them.

Overall, he is doing great and we enjoy his company!