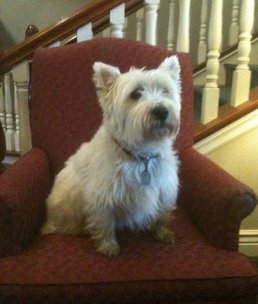 Barney first came to the attention of Westie Rescue for the San Francisco Bay West Highland White Terrier club on October 8, 2011.  His owner’s son emailed me about Barney after being referred to me from the Orange County California Rescue organization.  He said that his Dad was not feeling well and his Mom was suffering from Alzheimer’s disease and they needed a place for Barney, a five-year-old male with Addison’s disease.  When I told him we would be happy to find a new home for Barney, he indicated that his Dad was not ready yet but wanted a place to be found so he would know he could surrender him when he could no longer care for him

Two and half months passed and Barney’s owner’s health suddenly deteriorated and we were told that Barney was boarded in a veterinary hospital in Napa, California.  I started the process of finding a home for him and decided on the application submitted by Nancy Hacker.   Nancy is a single woman living in Hayward, CA who had lost her male Westie Max at age seventeen and was seeking a new playmate for her girl Meghan, a nine-year-old Westie.  Like many Westie owners, Nancy thinks two is better than one and Meghan was lonely.

I spoke to Nancy about Barney and she did not know anything about Addison’s disease so I sent some links to her with information.   I also provided the care instructions given by Barney’s owner.  She was concerned about the cost but thought his photo was adorable and his age was perfect.   I learned that Barney was at the Napa vet on December 22nd through a call from the owner’s son who told me that his Dad wanted Barney to be in his new home by Christmas Day.   Nancy was eager to celebrate the holiday with her new boy so I picked him up on the 23rd and took him to her home.   She has a lovely cul-de-sac home with appropriate fencing including a second fence around her pool.  I was walking Barney when she pulled up and jumped out of her car and said: “Is that my Barney?”   We took him inside to meet his new sister Meghan and off they went as they joined in a merry round of Westie play chases.  Meghan showed Barney around the house and the yard and he decided this would be a great forever home.

Later on, when Meghan and Barney joined Nancy’s son and his dog on walks they noticed a limp in Barney’s back left leg.  She took him to the vet at Rescue expense and was told he might have to have surgery soon.  Last month, he stopped putting down the leg to walk and was diagnosed with a torn anterior cruciate ligament.  She was very concerned with the financial implications so we applied to WestieMed for assistance with his surgery.  We were delighted to hear that funding was approved by the WestieMed Board!

Barney had his surgery June 14th and indeed the ligament was found to be completely torn.  The orthopedic surgeon at VCA Bay Area Veterinary Specialists, Dr. Courtney Ikuta, performed his surgery and the hospital gave us a courtesy discount.  Nancy and Barney and I are forever grateful to WestieMed for helping our Rescue in need!

We are so appreciative of your assistance with Barney’s ACL surgery.

He is doing really well and I have a great photo for you. I knew immediately what to send you.

He and his new sister Meghan were in our Parade of Rescues held by the club on November 3, 2012 and I have a photo of him and owner and his sis for you.

He is walking absolutely normally. He is also an Addison’s dog (I had one of those too) and the meds are so expensive so WestieMed really came to our Rescue in a big way.

Below is the story Barney’s new Mom wrote for the Parade which is really sweet. She is a fabulous Westie Mom!

“I walk proudly with my wonderful boy Barney.  My Westie girl Meghan and I lost my Max at seventeen years old. Our lives felt empty and lonely. Then Barney came into our lives last Christmas-I rediscovered what real love is! Here is his story: his owner was 87 years old and went to a nursing home. Barney was not allowed to accompany him there, and their hearts were broken. Mary called me and said–his Dad wants him to have a home for Christmas. That was a yes from me! When I arrived home on December 2nd,  I saw Mary walking with three Westies and their wagging tails–one was Barney!  He came home for the Holidays to a family of love. I immediately had him pose with Meghan in Santa and reindeer outfits for my annual Christmas card!  We played and hugged each other for hours!  Since that day, his existing Addison’s disease has stayed under control and he had ACL surgery on his leg.  Barney is back to catching toys in midair and doing all his tricks again. We share a bond of love!  He has been a perfect gift since I first saw his caring eyes and felt his wonderful heart.  He and Meghan are the loves of my life. Barney-I love you so much! Love,  MOM”

Thanks again for your most generous contribution to this sweet boy’s future health.

Barney is doing very well after his ACL surgery eleven months ago.  We had our 2013 Parade of Rescues on April 27th and he marched again with his sister Meghan.  No evidence of any lasting effect of the ACL tear and his owner was very diligent with his rehab.  I will cut and paste his story here from the Parade and include a photo of him from the collection taken at the event.

His owner is forever grateful to WestieMed for covering his surgery as is our Rescue for the SF Bay Westie Club.  Here is Nancy Hacker’s story:

Barney and Meghan – my Westies!  What can I say that explains how I love them and just how wonderful they are?  Barney is my adopted boy from Mary at Westie Rescue on Christmas, 2011.  We have visited Barney’s previous Dad at the nursing home.  They have been such wonderful visits for Gene and Barney.  Barney catches his toy in mid-air 10-15 times and everyone applauds him!  His Addison’s shots continue to be keeping him healthy.  We love him, and he says he loves us!

I hope this does the update for you!  I usually do not allow adopters and surrenderers to meet up but made an exception for Barney since his owner was unable to keep him in the home he was in.  He actually changed nursing homes to be closer to Barney so they could visit.  Guess you could say Barney is a therapy dog!

Thanks again for helping Barney!!