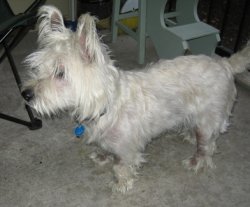 I had registered with Rescue Me and got a notification about a Westie that needed a home. I had written back immediately with my phone number and said that I had had Westies with skin problems before, my beloved Jake and Carli. Carli had passed last September at 16 years old and Jake several years ago at twelve years old with a spleen and liver problem. Both of them had skin issues but nothing like I have seen on WestieMed.

I was told that the mother had Alzheimer’s, rules the home and wanted Jessie put to sleep so the two adult daughters put him on Rescue Me. I went over to their home that night and I could see that he had terrible skin problems but I was really looking at his personality which was very sweet.

When I picked Jessie up to put him into the car he growled at me, and the suspicions started that I might have an abused dog beside a severely neglected dog. I have since discovered that he is quite territorial and in true Westie nature doesn’t back down and needs to be distracted. I’m learning too. I think this posed problems in his previous home and lead to abuse because they couldn’t handle him. I’m trying to understand.

I had asked what kind of food they had fed him and was told “dog food” but they gave a bag of pig ears to me as food. There was quite a lot of dancing around answers to direct questions but I was given a vet record and certificate of ownership. Jessie had been purchased from a “breeder” in Missouri.

I got online in the morning to check skin problems in Westies and the WestieMed site came up with pictures of Malassezia Dermatitis and it looked just like his skin problem. I’m so grateful to have found that information. I scrambled around to find a vet that could take him on a Saturday. I had just moved to Oregon from Virginia and I didn’t have a vet here. I feel fortunate to have happened along with a vet that has experience with skin issues.

Jessie is four years old, weighs thirty pounds, and he is neutered. He’s very large for a Westie but not overweight. He’s friendly, good with children and likes other dogs. All good. We are working on the skin problem with the vet; he’s on antibiotics and medicated baths twice a week. He’s responding well but may need antifungal treatment. I have him on a limited ingredient lamb and rice meal at this time but we may go to home-cooked through the Balanced In program that my vet told me about on the internet. I’m being challenged to write this and playing fetch the squeaking chicken this very minute.

I have changed Jessie’s name to Jesse without the “i”.

He is doing so well.

It’s been a slow process but he’s coming along very nicely as you can see in the photo.

Thank you again for all that WestieMed does for Westies in need.

As you can see, Jesse is doing very well.

He is healthy and happy.

There are places on his neck and chest that the fur is still growing in, I was thinking that maybe his skin was so damaged from the yeast that it might not grow but it is

He is just a joy and worth all the effort.