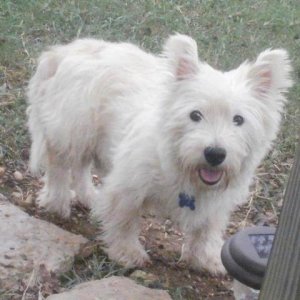 Charlie came to us with two other Westies and two Scotties after a commercial breeder dumped them in a rural shelter in Kentucky in late August 2012.  This particular shelter works in tandem with our shelter partner in Bowling Green, KY, and when the dogs were dumped, we immediately got a plea for help to pull from our contact in Bowling Green.  We drove up the next day and pulled all six dogs and took them straight to our vet in Franklin for exams, vetting, and dental.  Tennessee Scottish Terrier Rescue ended up taking the two Scotties, and our little band of Charlie, Chip, Maggie, and Hailey were vetted and boarded for a week so we could be sure they didn’t bring with them any Kennel Cough or parasites.  Needless to say, our vetting bills for these dogs was pretty steep just for basic vetting and dentals.  Everyone did well and traveled on to their four separate foster homes.

Charlie instantly began meshing in his foster home with five other Terriers, so much so that he took it upon himself to take a flying leap off his foster mom’s bed in the middle of the night about two weeks into his fostering, trying to follow one of the other Westies who decided she needed to go out for a potty break.  His foster mom knew instantly he had hurt himself badly.  She got him in later that morning to the vet who confirmed the ACL rupture.  Charlie was in a lot of pain, but the vet got him on the proper meds to give him some relief and we scheduled the ACL repair surgery for a few days later. Fortunately, our vet works with Dr. Paul Newman, a wonderful orthopedic travel surgeon, and he took excellent care of Charlie.  Two days later, Charlie was settling back into his foster home, and thankfully his foster mom is a nurse, so she can really help with the ins & outs of his rehab.  Charlie will have to be kept quiet and rehab his leg for the next six weeks, which isn’t easy because he acts like he’s had nothing done.  He wants to run and play with the others!  His foster mom has nicknamed him “Sir Bulldozer Charles” because while in the “cone of shame” he must wear for a few days, he doesn’t let it keep him from getting to things he either wants to smell or carry in his mouth.  He just scoops it up in his cone! Charlie is a very loveable little fella that will make someone a superior forever family member in a few weeks.  We cannot thank WestieMed for the kindness and generosity once again shown to Westie Rescue of Tennessee, Inc.!  Thank you again for helping us with Sir Charles!

Charlie had ACL surgery but we sadly learned that he had an aggressive tumor in his leg that had spread into his back causing a lot of pain.

We regret to tell you, but Charlie went to Rainbow Bridge on January 8, 2013 and now rests peacefully.

We are all very sad, but also very thankful for WestieMed’s assistance with him.

I thought you would enjoy seeing this photo of a once puppymill stud dog, turned loved and treasured foster pup.