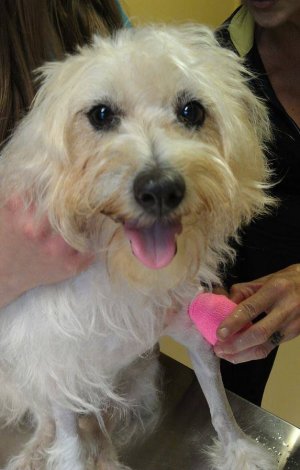 The Saturday evening before Labor Day, we received a call on the WRT phone from a very nice lady in Murfreesboro, TN explaining that an injured Westie had wandered up to their front door, and it was obvious she had been hit by a car. A neighbor said they’d seen the dog lying in a ditch and thought it was dead (but they didn’t bother to go check??!!). The lady and her husband took the dog to their personal vet and paid for the office visit and x-rays. The vet there told them they felt like she could be saved, but that the surgery to repair the damage would cost a minimum of $3000. The vet scanned for and found a microchip, and the office called the number only to learn the microchip had never been registered by the current owner, and the chip was registered to a former out-of-state breeder that had since gone out of business because the number on the chip was no longer a working number. The vet advised the couple that it was their responsibility to at least try to find the owner(s), and he felt like the best way was for the dog to be sent over to P.A.W.S.; the local shelter in Murfreesboro. The plan was for the vet’s office to keep and medicate the dog for pain through the holiday weekend, which the couple agreed to do. In the meantime, Brenda (the woman) found and contacted us. When I talked at length with her about needing to get our hands on the x-rays so we could forward them to our vet and on to the orthopedic surgeon we use to see what both of them thought for recovery prognosis, she told me she would call her vet and OK that being done. (Apparently, this is a 24-hour vet, and she was able to reach them on Sunday.) Sadly, the vet’s office had gone ahead and sent the dog over to P.A.W.S. the night before instead of doing what they’d said they would do, and I knew we would have a hard time getting her out of that shelter because they have proven to be extremely hard to pull from unless you have an inside contact. BUT, I was hopeful that because she was injured and thus, probably deemed unadoptable, it wouldn’t be so difficult this time. Well, I was wrong.

On Tuesday morning after Labor Day, I called the Murfreesboro vet the first thing, and the office immediately emailed the x-rays to me and to the orthopedic surgeon (because they, too, use him on a regular basis and know him well). I then reached out to the shelter, and they told me that because she had a microchip, she had to stay at the shelter five full business days, and we couldn’t include her past weekend time and holiday time in that, NOR could we include the following weekend. I was so frustrated!

After MUCH discussion and promises from the shelter director that they would ensure she was suffering no pain, one of our Board Members was allowed to pull her when they opened at noon on Tuesday, September 10th. We all feared that while the injuries seemed repairable in the early stages of her diagnosis, perhaps bones, tendons or muscles had begun to fuse together in an incorrect manner. AND, we feared the poor dog would suffer from some sort of shock. MUCH TO OUR AMAZEMENT, she was happy from the get-go; the tail never ceasing to wag! Also, we immediately got her to our vet, who again did x-rays and got Dr. Newman, the surgeon, over for a special call to evaluate the situation. While he was not concerned about the rear hip injury (and knew he could easily perform an FHO to repair the injury), he was concerned about the front leg and whether or not the alignment would be such that the leg could be saved. He felt like it could be, but wouldn’t know for sure until he got into the surgery. Thankfully, on the day of the surgery (scheduled a few days out from her arrival so she could be on antibiotics for a few days prior), we got the best news that the leg could be saved!

Millie is now in a foster home with a new foster mom who is friends with Brenda, the gal who originally contacted us. Thankfully she has experience with foster dogs with that sort of injuries, which is great because Millie doesn’t seem to think she has anything wrong with her! Alyce (the foster) has to take her back to the vet weekly to work with the dressing on the injury sites. The staples in her hip came out last weekend, and the front leg is healing nicely too. Still, Millie has to be somewhat sedated to keep from wanting to run and jump. Dr. Newman said it would be about a six-week recovery period. Once recovered, we will then get Millie spayed and get her ready for adoption. She is UTD on all of her vaccinations, heartworm testing, etc.

We will continue to send updates, and thank WestieMed once again SO MUCH!

Unfortunately, we still have not yet placed Millie in her forever home, though we do have a Meet & Greet set for her this Saturday, so paws are definitely crossed! The surgeon says she will have no issues down the road! She is very sweet and loves everybody and every doggie!

Millie continues to do well. She was adopted over a year ago and the last we heard from her owners, she is doing great. Her surgery will have been two years ago in September. Thanks to WestieMed for all they did to help us help her!