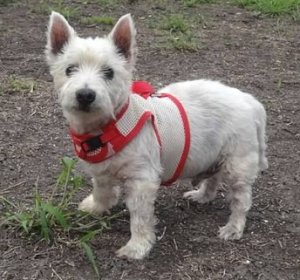 In April 2013, Stewart (a nine-year-old male Westie) was found huddled in the corner of an outside apartment storage closet. The tenant of the apartment had terminated his lease three days earlier abandoning the westie. Stewart was filthy and it was initially thought his collar was embedded in his neck; however, his collar was entangled with the mats of fur covering his body. The closet was littered with his feces. The only sign that there had been a human providing the minimal care/shelter for Stewart was the empty food bowl, small water bowl and wet cardboard box draped by a towel.

Stewart was picked up by the city of Austin Animal Services and taken to the Austin Animal Center on April 10, 2013. The veterinarian that initially examined him at the shelter recommended he be euthanized. Stewart was diagnosed with severe ear infections, severe eye discharge with scarred corneas and possible blindness, severe dental disease/ gingivitis and severe internal parasite infestation.

The individual that abandoned Stewart had told authorities that he found Stewart in a barn late 2010. Since then, there were only two known veterinarian visits – both within the first three months. Stewart’s ears were noted to have infections at the first visit and treatment provided; however, during the second visit (two months later), the ears were still infected but the individual did not want to pay for the ear cytology leaving Stewart’s ears untreated since January 2011.

We had been contacted by another Westie owner that lived in the same apartment complex when Stewart was taken to the Austin Animal Center. She and others that knew Stewart were concerned for his well being. We asked at the Center about Stewart when we were pulling another westie from the Center three days after his intake. We were told of the initial recommendation to euthanize but because it was a weekend day, the coordinator didn’t have the most current info and promised to get back with us.

Approximately thirty days after his arrival at the Center, we were contacted to see if we would be able to take Stewart into our rescue program. The Center provided us with a copy of Stewart’s lab work taken with his initial examination at the Center. We asked our veterinarian to review for her opinion. She told us that the results showed signs of starvation and suggested to ask the Center if they would be willing to do Stewart’s blood work again since he had been in treatment for thirty days. This new blood work did show that Stewart’s body was responding to the treatment; however, the Center still stressed that Stewart might be considered a “hospice” for our rescue.

Meeting Stewart…there was really no hesitation that we had to bring this guy into our rescue and show him the good life regardless of how short-term or long-term. It was still not really known if Stewart had any vision or hearing, but he clearly had the zest for life that westies are famous for. Stewart walked out of the Austin Animal Center holding his head high and enjoying the smell of freedom. Stewart’s past baggage was clearly left in that nasty apartment storage closet.

We took Stewart straight from the Center to our veterinarian clinic for an exam. He was very generous with his kisses (everybody overlooked the odor attributed to his extreme gingivitis) and won the hearts of all the staff at the clinic that met him. We were sent home after Stewart’s initial exam at our veterinarian clinic with a plethora of medicine and a lengthy checklist. Even though Stewart had been receiving treatment for the last thirty days at the Center, his ears were still infected. Initially, it was difficult to determine if the “goop” in both ears were medicine or drainage – sadly, it was drainage. His right ear canal was completely blocked which initiated the discussion of the Total Ear Canal Ablation (TECA). His left ear canal was horribly infected with a small opening. His eyes had some crust around them – when tested showed no evidence of tears. Stewart’s skin was dry with flaking and scabs – chronic dermatitis. Stewart was to return in fourteen days for a check on his response to the meds and treatments.

Stewart walked into his foster home without hesitation. We were still trying to determine his vision and hearing status but he was not content to be “sheltered” from the other furkids. Stewart wanted his freedom that he had been denied for so long. We let him out of the dog run and he began to explore the huge backyard. As happens so many other times, it appeared that the other furkids knew Stewart was special and they never challenged him but let him do his own thing. Stewart had the run of the house as well as the big backyard – this boy was not going to be crated or contained again.

At the follow-up visit with the veterinarian, fourteen days after his initial exam with our vet, Stewart’s left ear had shown good improvement. They were able to see inside the left canal at this time but treatment was still needed. The right ear showed no real improvement. His eyes were still crusting so Tacrolimus was prescribed to provide relief. We also learned from the earlier blood work that Stewart was hypothyroid and began Soloxine.

We were referred to Central Texas Veterinary Specialty to get another opinion regarding Stewart’s ears. Again, he kissed his way through this exam. We felt hopeful with the initial comments by Dr. Zacher; however, after her thorough exam in conjunction with the dermatologist, it was agreed that Stewart’s right ear canal was completely blocked and would require surgery. They both said without the surgery that Stewart’s prognosis was guarded and with the Total Ear Canal Ablation (TECA) surgery his prognosis was good. During the initial month that Stewart had been with us and since, he never exhibited any discomfort because of his ears. Without this surgery, Stewart would be at risk of continued infections in his ear which could result in a ruptured eardrum. Dr. Zacher agreed that it did not appear that there was an urgent need for the TECA so we opted to wait to allow Stewart some time to stabilize his other health issues but also learn to savor his new life.

Now, there is no doubt that Stewart is unable to hear anything. He sleeps through the loud barking of the other furkids when someone walks into the house. Since his arrival, we have determined that he does have some vision but limited. He compensates for his deafness and limited vision with a keen sense of smell. He loves to go outside and explore the backyard. He clearly loves his independence, yet he is content to sit in a lap and give out kisses. Stewart shows no pain even though his teeth are in horrible condition. He has a healthy appetite and enjoys supplementing his diet with carrots, apples, bananas, green beans, strawberries, and homemade chicken liver treats. Our veterinarian has said Stewart will require two sessions for proper cleaning; however, his right ear is a higher priority.

Just six months ago, Stewart was abandoned in a dark closet, scoring a five out of five (with five being the worst) on a Tufts physical care score and a recommendation to be euthanized. Five months ago, Stewart was on seven different medications to clear up various infections and currently he is only on two routine medicines (eye drops and Soloxine). He learned the routine of the foster house quickly and adjusts to days that are not routine. He wakes up each day in freedom and enjoys life. With the help of WestieMed, Stewart will be scheduled for the TECA – eliminating the risk of future emergencies. He is safe, dry and warm – loving life and people!

We are grateful for an organization like WestieMed that provides support for these precious little white furkids. This organization and their support go a long way to help large and small rescues. WestieMed is like a safety-net for so many. Stewart sends a bunch of kisses to all who have made this possible. Thank you just doesn’t seem adequate to express our gratitude.

I was able to go by and visit Stewart this afternoon during the visiting hours. He surprised them with his readiness to eat yesterday after his surgery. I took some Cinnamon Apple muffin treats I had made earlier this afternoon for him to enjoy and he did. I wish I had taken more but really wanted to be cautious and not jeopardize his recovery. He doesn’t have any dizziness which is good. He has a short-term nerve side effect with not being able to blink his right eye but they expect that to disappear within two weeks. The nurse told me when I was leaving that if he keeps going as well as he is, he will be coming home tomorrow! Yea! They suggested a Pro-Cone or is it Pro-Collar. The blow-up collar won’t be good for his surgical area. So I will be getting one before I go pick him up tomorrow. Again, we are grateful for the support of WestieMed for Stewart’s surgery. He is just one of many benefiting from this fabulous organization.

Stewart continues to thrive. His dogtor was pleased with his smooth recovery and no complications from his TECA (Nov 2013). Stewart had already lost his hearing in both ears prior to this procedure because of the neglect and lack of treatment for his ear infections. We do continue to fight his two other issues – skin and eyes. He gets the prescription eyedrops in both eyes daily along with GenTeal gel. We are giving him medicated baths which help provide relief to his itchy skin. Because of his surgery, he had almost three different lengths of fur all over his body so early February we groomed him giving him a short fur cut. With the unusually cold winter we experienced and his short fur, we had to find him a fleece sweater and discovered that Stewart is a clothes hound! He actually pranced when we put his new hoodie on him!

This month (April) also marks the one year anniversary of Stewart being taken into the Austin Animal Center after being found abandoned in the storage closet at an apartment. Stewart can now decide if he wants to go out and come in! It brings us great joy when we look and Stewart is far off exploring the backyard!

Stewart continues to perfect his two hobbies. One is eating and the other is sleeping! He knows the feeding routine and eagerly goes to his “station” for his food bowl. Stewart is not shy…he is more than happy to thank you with a kiss. Stewart is a happy boy and blends in well with the other furkids.

In the next month or so, we anticipate scheduling Stewart for a dental. His dogtor has said that she anticipates it will take two procedures. We are sure there will be extractions but know that slow Stewart down when he is eating.

Once again, we are grateful for WestieMed’s assistance with Stewart’s TECA but also for their help with all the Westies that need help. If Stewart could give everybody with WestieMed a kiss, he would!

Stewart continues to do well with no complications from the surgery as expected. He is two years older now. His eyesight has gotten worse but that has not seemed to slow him down. He knows the routines of the house, where his favorite doggy beds are (although he sleeps on my bed at night) and when it is time to eat. We are struggling with his skin this year but Stewart practically sleeps through his medicated baths.

It still amazes us that Stewart is so accepting and loving considering the two years (at least) of neglect and chronic health problems. And we are grateful to the support of WestieMed for Stewart and all the Westies in need.