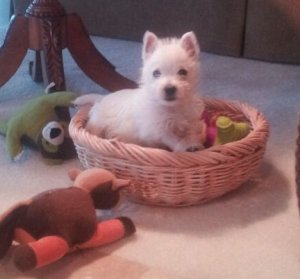 Maisey, now renamed Faith, came to us when she was only nine weeks old. Faith weighed less than two pounds when we rescued her. She was lethargic, had a terrible case of diarrhea, and erratic breathing patterns, not only during waking hours but when she was asleep. Our first priority was to get Faith to our small-town veterinarian who had cared for our other rescued Westie and several other dogs for over nine years. In our town, we are lucky to have a veterinarian that sees patients five days a week. He has no after-hours coverage or answering service, and is not set up to care for animals on an emergency basis. He is dedicated but overwhelmed.

Our vet did a thorough exam, took this tiny little baby Westie to the back to have a vet-tech run several lab tests, and came in to chat with us. He informed us that Faith had a heart murmur, was dangerously underweight, was dehydrated, and probably had some type of intestinal parasite. He immediately handed us a brochure for a 24-hour emergency and critical care specialty clinic three hours from our hometown and admonished us to get Faith there as quickly as possible. He told us he was certain that she was going to need extensive treatment which he was incapable of providing in his small facility. We fueled up our car, called our neighbor and asked her to please feed our dogs and let them out periodically, and headed out.

The veterinarian who first saw Faith was a canine cardiologist. A cardiologist for dogs?? We never knew there was such a thing. His vet-tech spent about ten minutes simply listening to her chest. She was methodical and focused. Faith was so weak by this time that she could hardly stand up. The vet-tech told us she was going to take Faith to the back and start her on some oxygen, have the cardiologist exam her and that he would come in to talk to us “soon”. It seemed like forever, but the doctor eventually came in to talk with us. He wanted to do an echocardiogram and chest x-ray right away. Faith was critically ill. We were told these exams would take about an hour. That was the last time we saw Faith until she came home.

My husband and I went out to the waiting room, and the vet-tech called us back in to talk to the cardiologist about 45 minutes later. He reported that Faith did indeed have a heart murmur, a ventricular septal defect, a hole in her heart. He proceeded to draw diagrams for us showing exactly where the defect in her heart was. Surprisingly, he said that her heart murmur was “the least of his concerns”, and that while it was considered a very serious health issue it would likely resolve itself as she got older. What concerned him the most was the chest x-ray. Faith’s lungs were “over-inflated” from continuous prolonged heavy breathing. The cardiologist had asked for a consultation from the in-house internal medicine doctor who reviewed the x-rays and concluded that the over-inflated lungs were likely caused from bronchopneumonia, a condition that would require monitoring around the clock. Faith was admitted to the Intensive Care Unit, hooked up to two IV catheters with two different antibiotics, and placed in an oxygen cage 24 hours a day which included nebulizer treatments. Numerous lab tests were run while they worked on resolving her severe diarrhea and dehydration. They hand-feed her one tablespoon of food at a time, every four hours around the clock.

We left the Intensive Care Unit weary and dazed for our three-hour trip back home. We were aware of the WestieMed organization through several rescue organizations we had been in contact with and supported over the years, but never thought we would ever be the recipients of their tremendous generosity. We contacted them the next day and their application coordinator Bette responded almost immediately. WestMed President Lucy Ryley contacted us the following day to gather more information and offer her support and best wishes.

We have always kept a “health savings fund” for our dogs to cover their maintenance needs for well-visits to the vet, immunizations, teeth cleaning and incidentals. The initial diagnostics for Faith alone completely depleted that savings account.

Faith is now home with us. When they released her they stated that she should be on “bed-rest”, if there is such a thing in the life of a Westie girl. While the doctors consider her condition greatly improved, they will need to monitor her with additional x-rays and review her clinical status over a period of time.

There are no words to describe the appreciation we have for the wonderful folks at WestieMed. Faith would likely not be alive today if it were not for their generosity and for their love of our Westie.

We will continue to provide updates as Faith improves.

Faith has gained a full twelve ounces since she came home. She is thriving and happy…and boy, is she a handful! I asked my husband if this is the same Westie girl that we took to the ICU. We could feel her ribs and bony little back and hips when we rescued her.

When we last corresponded with you Faith was about two lbs eight ounces. While she was “out of the woods” with her bronchopneumonia, we still had to monitor her condition and keep her on two antibiotics for the next two months. We had her back to the internal medicine doctors two more times. Faith was unable to receive any of her puppy shots, (while still on antibiotics) so taking her off of our property or into public places was not an option. While she continued to be on medication and recover, we spend her waking hours teaching her to walk on a lease and learn basic rules and commands. Thank goodness we live on a fully fenced acre with lots of areas for her to learn to dig like all happy healthy Westies. Our other Westie Miley and Bichon Maggie were allowed to play with her when she wasn’t sleeping.

Faith continued to do well and gained a whopping six more pounds. Around the 1st of April, she received her first set of puppy shots and three weeks later the last booster. At that point, Faith had learned to walk on a leash and the world just opened up for her. She was ready for walks with Maggie and Miley who go out twice daily for two-mile walks. For the first few weeks, we only took her on the morning walk, and sometimes I would carry her on the way back if she got winded. You see, not only did she have bronchopneumonia, she had a collapsed lung. The internal medicine doctor informed us that this likely happened when one of her litter-mats stepped on her when she was only days old. It will never inflate again and she will have to live with it for the rest of her life.

Don’t think for a minute that these chronic conditions have slowed her down…to the contrary. She only has one large lung lobe, and still has a loud heart murmur, but she is like every other happy healthy Westie and gives our other two dogs a run for their money. The vet told us that she will set her own pace. So far her pace if FULL SPEED ahead!! When its bedtime and she runs up the stairs with Maggie and Miley headed towards her kennel, we can hear her wheezing. She takes three breaths for every one breath Miley takes, so it appears that she is panting all the time. It’s not something we ever get used to. Our vet tells us that her life MAY be shortened by her ailments or she may live to a ripe old age. There is no way to tell.

What we do know is that had it not been for WestieMed and their love for Faith she would not be here at all. Thank you again for your support, for your love, and for your resources. We are deeply grateful to your organization.

Happy New Year to everyone at WestieMed!! We have an update for you regarding the progress of our sweet little Faith.

As you all know Faith, was near death around this time last year. She just celebrated her first birthday in early December. She is happy, healthy and getting into mischief. The vet tells us that she will always have to be monitored for pneumonia because of her collapsed lung lobe. She has adapted well and sets her own pace. She takes more naps than other pups her age, but we knew that would be the case, and believe me…we’re not complaining. LOL

She gets up every day with such a love for life. She “lives” for her early morning two-mile walk with our two other dogs. She is so loyal and we can feel her gratitude. It is almost like she is saying “thank you for saving my life…for giving me every chance to live”.

She just loves to dig. We have a full acre of land with a designated area where she can dig to her heart’s content. She comes over to me completely black up to her chin with the most clever look on her face. All I say is “did you have a good time”?

We are so grateful to the folks at WestieMed for helping us give her a second chance at LIFE. Thank you for giving us the gift of Faith’s life and for your love of all our Westies.