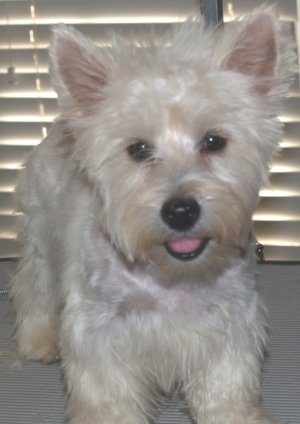 Little Louie was a “surprise” gift, along with another Westie puppy, for a girl from her boyfriend. Louie was four months old, and Lloyd was five months. She did not have time to devote to their care, and she surrendered them to the Atlanta Westie Rescue Committee in September of 2012.

When Louie arrived for foster care, we noticed that he was very small, even for four months, and he also had a very sensitive stomach. We finally put him on a diet of boiled chicken and white rice. Our rescue vet, Montrose Animal Hospital in Marietta, Georgia, recommended that we add a kiddie vitamin and fresh spinach and sweet potato to his diet to ensure he was getting the proper nutrition. He still had stomach issues though, and at one point had to go to the emergency clinic for a day. He was a tiny little puff ball at 5-1/2 pounds and did not appear to be growing. We were concerned that perhaps he was suffering from “failure to thrive.”

Louie’s big boy neuter surgery was scheduled in November, and that is when his little life changed. Dr. Davis at Montrose said that his pre-surgery blood work showed numbers “all over the place,” with high liver enzymes and high WBC count of most concern. Given Louie’s other symptoms, Dr. Davis suspected Portosystemic Shunt (PSS, or liver shunt), which means that the blood was bypassing the liver and therefore not being cleansed of all the toxins. Dr. Davis felt that an ultrasound might be beneficial, and it did show a very small liver. The neuter surgery was canceled and Louie was sent home with antibiotics and a special hepatic diet.

There was a huge difference in Louie in just a couple of days as his body fought off infection and he received the proper nutrition. Another medication was added to help Louie pass the toxins out of his body, and again there was a marked improvement in his demeanor. These medications were given in anticipation of Louie having corrective surgery for the PSS.

Louie was referred to Dr. Berryessa at Georgia Veterinary Specialists (GVS) for a consult. Louie’s “entourage” consisted of his foster mom, the chair of the rescue, and the VP of the Westie Club of the South, all there for moral support. After the initial examination, Dr. Berryessa suggested another ultrasound to try to confirm that Louie had a PSS. We met the most amazing staff, all very caring, and they even let us go back with Louie for the ultrasound so we could see what they were looking at. The procedure was thoroughly explained to us, and it was confirmed that Louie was very sick with a PSS.

Due to the fact that we had changed Louie’s diet and had him on medications, he was looking healthier and gaining a little weight, which made us happy. We also discovered this amazingly active pup with newfound energy who played until he couldn’t anymore! What a difference that made, and we were hopeful that the surgery would help even more.

Surgery day arrived and we dropped Louie off bright and early at GVS. They took him back and Dr. Winkler, the surgeon, came and talked to us before we left and assured us that he would call as soon as the surgery was over, which he did. However, the news was not what we had hoped for. They were unable to repair the liver shunt because (1) the veins were in the wrong location and (2) Louie’s liver was very tiny. The surgeon was able to neuter Louie while he was under. He had an overnight stay, and we were able to pick him up the next afternoon.

As an aside, my teenage daughter had a liver transplant eighteen months ago; as difficult as it was for me, I could deal with that okay. However, I was not prepared for the pitiful little baby I picked up from GVS, and it just tore my heart to pieces. We brought Louie home and put him in a nest that we had created to keep him quiet and away from the pack to try and help his little body heal. The first couple of days he was pitiful, but as his incision healed he started acting more like himself. After about a week, it was difficult to keep him quiet because he wanted to play and be with the pack.

Since then, my daughter and Louie have been on the same schedule for medications (so Mom can keep it all straight). Now almost three months later, Louie is thriving and growing and is a happy pup at thirteen pounds – almost tripling his weight since diagnosis. Although he may have a shortened life span, he is living life to the fullest and is a sweet, mischievous little man who makes us laugh all the time. He is a delight to have in the house, and all of our children’s friends have “adopted” him as their foster brother, too!

All we can say to WestieMed is “thank you for being there when we needed help.” There is no way we could ever thank you enough for your assistance with Louie’s surgery.

Many of you will recall the story about Louie, the littlest four-month-old Westie I had ever seen. He was surrendered in 2012 along with Lloyd by a woman who was “surprised” by her boyfriend with two puppies, and she had no desire to raise any puppies. Apparently a backyard breeder was getting out of the business (i.e., someone had turned her in) and she would not take the puppies back.

Louie came in relatively small, but he didn’t thrive no matter what Rhona fed him. After about a month, Rhona and his two aunties (Cindy and Harriett) took him for a consult with Georgia Veterinary Specialists, and Louie was diagnosed with a liver shunt, which was unable to be surgically repaired. Louie has been on medications ever since to keep him as healthy as possible.

His foster mom, Rhona Terrell, was up with him all night last night. A trip to the vet showed that Louie is going into the next stage of his liver disease. His protein and albumin levels are very low, and there is fluid in his belly. After discussing his condition with the vet, I have opted to keep him comfortable on diuretics and anti-nausea medicines.

Louie is still a very happy (although somewhat tired) one-year-old. Rhona, James, Matthew, and Kathleen (and all of their friends) are taking wonderful care of him. Rhona said it best this morning: “Louie has loved a lifetime in his short life” and I don’t know anyone who has met him that did not fall in love at first sight.

I just wanted to update everyone on his condition and express my appreciation of everyone coming together and rallying around this little pup. Now Louie and his foster family need our prayers and all good thoughts.

Louie is doing well most days and continues to delight us with his antics.

He has slowed down a little, which is all part of his condition.

He still loves to play with the pack but prefers to sleep by himself most nights as he gets restless and, due to being on diuretics, has frequent bathroom breaks (so does Mom).

Whether he is running and playing or just chilling in the sun, the outdoors is his favorite, although at the end of the day he is very content to be snuggled up in someone’s lap with a blanket.

We go on walks to the park with him and the other dogs, he can’t go the same distance but he is very happy to be in his stroller (see attached picture) after he is done walking.

He will turn two in May and we know every day with this loving little guy is a blessing.

Thank you again WestieMed for being there in his time of need; we are all truly grateful.