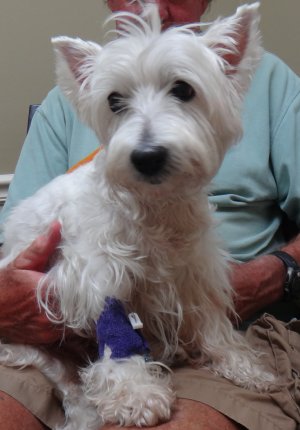 The Toss Away Dog

Shandy is a poster child for, and the definition of a toss away dog. Her life story started out as a happy one, with Shandy being loved by her senior caregiver for the first eleven years of her life; however, shortly after his death, she found herself discarded time and time again, by people who were supposed to love her, care for her, and protect her for the remainder of her life. But, thanks to the help of WestieMed, Shandys’ future is going to have a happy ending: One where she is healthy, and surrounded by a family, who will always be there for her with loving, open arms.

In the early spring of 2012, as Shandy was grieving the loss of her master, she found herself living in a crate at a local Orlando groomer. According to the son of the deceased owner, who had inherited Shandy, he was a “cat person, and not a dog person”, so he simply made a decision to discard her. At this time, she was circulated through all the local rescue channels, but due to her description of having a leaky bladder, and considering her age, most felt she would be a hard placement and declined to accept her into their rescue.

Luckily for Shandy, one of the rescues did offer to courtesy post her and her situation and even had glamorous photographs taken of her to use in the posting, which did generate an adopter. The adopter, however, did not take Shandy to a vet to address the leaky bladder issues, and then wanted to return her after only two weeks. Once again, she found herself facing an uncertain future.

It was at this time, my husband and I were contacted to retrieve Shandy. Once in our care, she was immediately vetted and discovered to have Giardia, as well as a bladder infection of unknown causes, which was the reason for her leaky bladder. So, after several months of healing, as well as pampering, she was placed up for adoption. In May of 2013, via a courtesy posting of a breed-specific rescue for our State, we all thought Shandy had found the perfect home, with a Westie knowledgeable family. But after seven weeks in this home, she became ill, and was once again, surrendered by her caregivers.

Upon hearing how sick Shandy was, my husband and I, along with the aid of two rescue groups, went into overdrive to save her life. She was presented to our family’s personal vet near death: exhibiting dehydration, vomiting, diarrhea, lethargy, elevated WBC, Low Protein and anorexia. After spending six days in critical condition, the decision was made to transfer her to a specialty hospital, where she was hospitalized for an additional nine days. After being poked, probed, and scanned, she was ultimately diagnosed with Irritable Bowel Disease (IBD). She is now on the mend and expected to make a full recovery.

However, there was an enormous debt incurred to save Shandy’s life. So, we reached out to WestieMed for assistance, and through a quick review process of all the details associated with her illness, they approved her for a very generous grant. Like us, they feel that she deserves a chance to live out her Golden Years in good health, surrounded by people that truly love her. Considering all this fur-angel has been through and how much she has touched and imprinted on our personal lives, neither my husband nor I could stand the thought of her suffering any more than she already has. We realized that Shandy has found her permanent home: It is with us.

We can never express our gratitude enough to the board of directors of WestieMed, as well as to the donors who support their mission, for helping Shandy have an opportunity to have her happily ever after story.

Although I write this with much sadness, I also write it in celebration of the happy memories of her sunbathing and going to outings to her favorite park, activities which she enjoyed for many months due to the generosity of the donors who support WestieMed.

Most importantly, Shandy did not pass away feeling abandoned. She left this earth belonging to a family who wanted her and cherished her. We miss her very much but realize only her physical body has left, as she will live on in our hearts and memories forever.