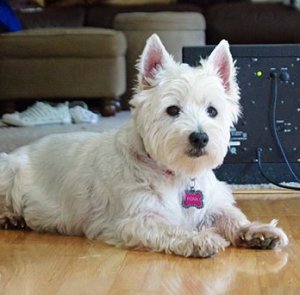 We had recently lost our beloved seventeen-year-old Cairn terrier, Tesla and thought that our fourteen-year-old Westie, Sully, would be okay with being an only dog. After just two weeks of depression, we knew that we needed to bring another terrier into the family. We went to Petfinder.com for the third time in our lives to look for an older Westie, Cairn or Scottie we could adopt. There we found ‘Snowball’, soon to be Fiona. We knew right away she was the one for us just from her description: a female ten-twelve years old Westie pulled from a kill shelter somewhere in western Kentucky, described as active in the yard, chasing anything that was in her territory, okay with the foster Westies and loving with her people.

We filled out an application and two weeks later Fiona came for a visit. Things went well with Sully. We asked about her health and were told she was a healthy dog, and she seemed to be other than a skin fold sitting on her lower back at the start of her tail, and her tail which seemed permanently curled under her body. Despite being told we’d need to wipe the pouch out once a week, we decided the two dogs got along well enough, and she liked us too, so she stayed for the week. During that time, she stole our hearts! She gave Sully exactly what he needed to start eating, playing and sleeping through the night again. She gave us all the love we could take! After just three days with us, we decided to adopt her, contacted the rescue to let them know, and scheduled a veterinary visit for Saturday morning. We knew going into it that she had the skin fold, her tail was curled under and she was very itchy with allergies. We were not at all prepared for what the vet would tell us.

Veterinarian Dr. Nicole Harris met Fiona and began her examination. She knew immediately that Fiona previously had a broken back. This was confirmed on x-ray minutes later, and by determining that she had no feeling in her tail. Dr. Harris said that she most commonly saw this type of injury from when a cat, more often than a dog, had been swung by its tail or been run over by a car. Also, Fiona was diagnosed with a horrible case of demodectic mites – confirmed with scrapings off of her back feet and heels. And to top it off, she has probably never had a dental cleaning.

The vet advised us to eradicate the mites and ear infections first, and then to address the tail and skin fold removal. The tail removal being essential to Fiona’s future health, since the way the tail is curled under her body, the fecal matter gets on the tail and then right into her urethra. We spent three months killing off the mites with dips and pills and twice-weekly two-shampoo baths – all of which Fiona took in stride! She is such a sweetie and during bath times we really bonded.

Despite asking the rescue for help with some of the medical costs they have avoided us and will not respond to any contact via phone, email or even Facebook.

We found WestieMed out of pure luck or karma. A friend of mine posted a link to a dog magazine on Facebook, which led us to RedRover.org, which had a listing of breed-specific medical help organizations. We couldn’t believe our eyes when we saw the site for WestieMed. We read everything then went ahead and applied for assistance following Wendy’s lifelong motto of “I’ll ask – the worst someone can say to me is no.” We are scheduling her surgery to happen within the next couple of weeks and cannot wait for her to be fully healthy! Although we miss a wagging Westie tail on her, we know that she is happy in our home as she shows it us continuously, coming more and more out of her shell every day. Especially while protecting her yard from birds, squirrels, and even the local woodchuck!

A sincere thank you to all those at WestieMed and its supporters,
Wendy, Lonnie, Sully & Fiona Eubank

To WestieMed – thank you so much for your help with Fiona. She is such a wonderful little creature. We just love her to no end! The surgery removed her tail as it was dead, and left her with a little cottontail, so we still have to clean her bootie once a day to make sure no-poo gets where it shouldn’t cause a UTI.

Fiona lost her Westie brother a year ago to lymphoma. After very careful consideration we had her meet an older Scottie and they got along so well he came home with us. Jack is an eleven yr old Scottie, from the TN Scottie Rescue. He lets Fiona run things and they are both quite happy with that arrangement.

Fiona is doing quite well, although allergies are tough this season, our vet is helping us get through it! She is such a little princess – a true terrier princess!

We would never have been able to get her all the medical care needed without WestieMed to help. We are forever grateful!

Unfortunately, Fiona passed away in July 2017. She was approximately seventeen -eighteen years old. In the end, she had lymphoma and was blind. But thanks to your grant four years ago, she was happy and healthy. We miss her.