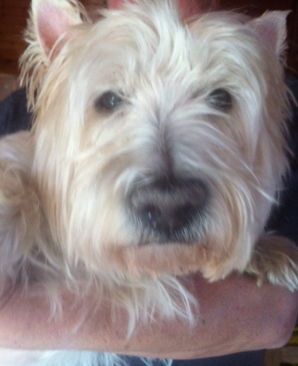 Merlyn came to New York Westie Rescue from a shelter. His owners had surrendered the old boy saying that the wife had ‘suddenly developed allergies’ to him, but his condition told another story. He was underweight, arthritic, his coat was very thin and his skin was not in good shape. His teeth were a mess, as well. He was old, grumpy and didn’t see or hear very well and walked with an odd gait from arthritis. He also had a growth in his left ear and an ear infection. He’d never been neutered, so his prostate was quite enlarged and like a lot of old men, he dribbled a bit. Poor Merlyn really wanted to be loved but wasn’t sure how to respond sometimes when he got it. He startled easily and would snap out of fear sometimes. We weren’t sure of his exact age, but the vet estimated that he was probably at least twelve or thirteen if not older. He didn’t have any adopters that were very interested in taking him on, so NYWR made the decision to keep him in the sanctuary.

After proper vetting, a new diet, dental cleaning, and neutering, he seemed a bit more comfortable and began to settle in, although because of the damage done by the severely enlarged prostate prior to coming into rescue, he would have to wear a belly band most of the time. He soon appointed himself the Lord of the Manor and when we got another little old fellow, Egan, who was in really terrible shape, he took up his post as Egan’s guardian and would watch over him, a task that he took very seriously and continued until Egan was well on his way to healing.

Unfortunately for Merlyn, his ear was not responding well to treatment. The vet tried a number of things but nothing was working and his ear began to get worse. We finally made the decision to get a second opinion. The vet we took him to decide that the only thing that was going to end Merlyn’s constant discomfort with his ear was a partial ablation of the ear canal, which is a very expensive procedure.

Thanks to WestieMed, we are able to schedule this surgery for Lord Merlyn, and provide him with some comfort and relief in his old age. Thank you WestieMed for the great work that you do and making it possible for Merlyn to start feeling better!

I am sorry to tell you that our sweet, loving little Merlyn passed to the Rainbow Bridge on June 4th of this year. After the surgery that Westie Med provided the funds for, a biopsy of the tumor that had invaded his ear canal revealed that he had a rare form of cancer, ceruminous adenosarcoma. There was nothing at that point that could be done to help him so we kept him comfortable in our hospice program and he survived with a good quality of life for several more months. Unfortunately, the tumor caused a stroke and when he lost his quality of life we made the decision to let him go.

Thank you for making the surgery possible, and allowing him to live without the pain of the tumor pressing on his nerve, and being loved and cherished. All of our Westies are special, but there was something about Merlyn that made him extraordinary. He was an extremely loving, loyal fur baby who was grateful for every little kindness and always thanked me for everything with a kiss. It never failed. Before he would eat, he would say thank you. When I tended his ear, he was grateful and would say thank you. Right up until the end he took his thrice daily house patrols quite seriously and would check each room and door to make sure that there were no intruders. He guarded me with devotion and never left my side. I miss him terribly.

I am more grateful than I can ever express for the help that WestieMed provided that allowed us to be blessed with him a while longer, and for him to experience the love and care that he was so grateful for. There are not enough thank you’s in the world to fully express our appreciation for the wonderful work that you do. So many Westies count on you.