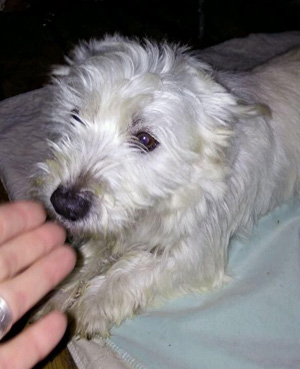 We picked up Calli from Tri-State Yorkie Rescue in Evanston, Indiana the morning of January 14th. We found her darling face on PetFinder.com when we decided to look for another Westie after losing our little girl “Cotton” in December. She would have been fifteen years old this month. Calli was very fearful and wouldn’t make eye contact but sat quietly in my arms for seven hours till we got home in Michigan. She slept almost constantly and we attributed it to Post Traumatic Stress Disorder (PTSD) and so just held her and loved her. She had never been out of a cage until her rescue, but with patience, she has learned to trust us and tries to please. She has learned to go through doors when opened and climb steps; she was so fearful of everything.

I noticed Calli’s ears were full of black “coffee grounds” looking stuff, so, thinking it was ear mites, the next day we took her to our Vet for a “wellness check”. He treated her for an extremely bad yeast and bacterial infection in both ears, mutating the ear canal membranes so much that they are almost closed off. She is very hard of hearing and can’t tell where sounds are coming from and therefore she bolts and cowers when startled. Surgery may be needed to open the canals at some time in the future.

She had two teeth removed because of rot due to sawdust being used as a filler in her food and she had also been spayed so we thought her lethargy was due to all the stress of these surgeries and also trying to acclimate to new surroundings. It was when she started to learn to play and run after her new “squeaky toys” we realized she had trouble breathing and thought that being so tired should not be lasting this long in a two-year-old dog. We took her to the Vet again and even though the “wellness check” had eliminated blood problems and heart issues, after two x-rays he diagnosed her with Chronic Bronchial Disease. He also re-checked her for Heartworms due to her lethargy. She has not responded to antibiotics or bronchial dilators and she is now on Prednisolone, which we were hoping she wouldn’t have to take because of the side effects. So far, tragically, she hasn’t responded in a positive way to any of these treatments. The sad thing is that now that she has learned to play, her disease causes her to gasp for air and she stops playing and now sleeps most of the time.

After another x-ray at the end of this month, to see if there has been any change after the prednisolone treatment, he has suggested that we will need to see a lung specialist. What that will lead to we don’t know.

Calli is such a sweet and adorable dog – very patient and good about all she has been put through to be treated for her ailments, and we haven’t even mentioned her footbaths for allergies. We were told about “WestieMed” by a really good friend who has also rescued many dogs. When we heard we were able to get financial support to help Calli have a healthier life, we were elated and very grateful. There will be ongoing expenses related to both, her ears and lungs. We will have to wait to see if we need to take her to a specialist because, so far, she hasn’t responded to any of the protocols our Vet has prescribed for his diagnosis of Chronic Bronchial Disease.

My husband and I are so grateful to WestieMed for their support and plan to love Calli and take care of her for the rest of her life. It’s been bittersweet – seeing her blossom and then realizing she has so many limitations.

You last heard from us on March 20, 2015. Calli was on a steroid and was thought to have Chronic Bronchial Disease. Our vet felt that since she wasn’t responding to either bronchodilators or the steroid, we should see a specialist, which we did on March 31, 2015. Calli received an ultrasound from a veterinary cardiologist, was treated for lungworm and they ruled out a fungal infection in her lungs and Pulmonary Hypertension. She was then seen by a specialist in internal medicine. The final diagnosis was Idiopathic Pulmonary Fibrosis (IPF). The high humidity here in Michigan is making it difficult for her to breathe, so, our air-conditioning is on constantly, which is helping. We are keeping her in the house as much as possible as this helps

Calli also has many allergy problems which are causing her much distress. She is currently taking numerous Pharmaceutical and Natural medications that are not totally effective, but, it is better than it was. Additionally, because of diarrhea and vomiting, she has been diagnosed with colitis and so, is now on special dog food that seems to be calming that down, but seems to be somewhat allergic to it which is exacerbating the itching in her infected ears. She is driving herself “nuts” with the scratching.

We never know, from one day to the next, how she will be breathing. Even so, she is a remarkably happy dog and brings us much joy. We love her and are committed to keeping her comfortable for the rest of her life, however long that may be.

The short life of our dear little Calli ended on January 2nd, 2016, two weeks shy of being with us a year. She was a precious gift and brought us much joy.

We read about cold laser therapy on your WestieMed website in November and found a holistic vet forty miles away and we took her for many treatments – twice a week for five weeks along with some enzymes that were to help break up the scar tissue in her lungs.  We did what we could to save her, but the Pulmonary Fibrosis was, evidently, too far advanced and we had to let her go.

Thank you so much for all your support.  We will always be grateful for your help!

Calli was a special gift.  Even though she was with us for such a short time, she knew love and gave love.