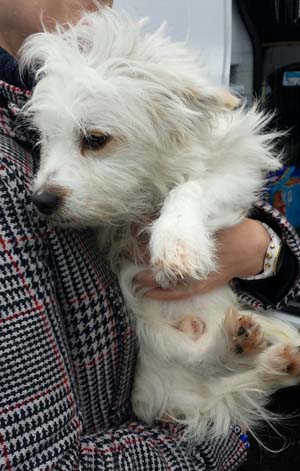 Niles the Westie, at roughly nine months old, found himself abandoned and seriously injured at the Inland Valley Humane Society in Pomona, California. It all had happened so fast; the squelch of the tires, the force of impact, and then a surge of pain like he had never felt. It is unclear what happened after that moment, but somewhere along the line, Niles’ owner made the decision to leave his fragile, little life in the hands of a shelter worker instead of getting him the emergency medical attention Niles so desperately needed. And in that shelter is where he stayed. It’s not certain how long he was there; minutes turned into hours, and hours into days, with Niles growing weaker, fading fast. It seemed to this poor boy, who had been through so much and was so scared, that all hope had been lost . . .

And then there was movement. Barely conscious, Niles was being readied for transport; he was being rescued! When he was first brought in to the shelter, his story caught the attention of the Aberdeen Scottish Terrier Rescue (ASTR). It wasn’t an easy task to get him out; there were many phone calls to make, much paperwork to fill out, and many arrangements to be made. But finally, it was time, and a real race against the clock it was! Terri and Susan of Wiggle Butts Pet Transport were transporting Niles, along with many other dogs, up to Seattle, Washington. The van was scheduled to arrive between 4 and 4:30 p.m. That left a very narrow window of time to get Niles to the veterinary office in Newcastle before it closed at 5 p.m.! Upon arrival, his rescuers greeted him with open, soggy arms (from the heavy rainfall they endured while they waited  Welcome to Washington!) And no sooner had he arrived, Niles was whisked away to the Animal Hospital of Newport Hills.

He wasn’t in the clear just yet. X-rays were taken, and Dr. Aspen Davidoff confirmed he had multiple fractures of the pelvis and tailbone, which could only be healed with rest, and another fracture of his right femur, which would require surgery to remove the broken piece of bone. Surgery, neutering and microchipping were scheduled for a couple of days out, and in the meantime, Niles was given medication to help with the pain and bring comfort.

Niles’ surgery went very well and he is on the road to recovery. But he isn’t alone on his journey. Not only did the kind folks of ASTR save him, but he also has a pending adoption with Dr. Shan Rosenkranz, another veterinarian at Animal Hospital of Newport Hills. Dr. Rosenkranz and her husband fell in love with Niles after bringing him home to recuperate. They knew they couldn’t let this beautiful, courageous pup leave their home or their lives.  A last-minute foster turned foster-flunk!

A big thank-you to the volunteers of ASTR, Wiggle Butts Pet Transport, and everyone at the Animal Hospital of Newport Hills involved in Niles’ rescue and medical care, and to WestieMed.org for their generous grant award to help fund his care we are forever grateful.