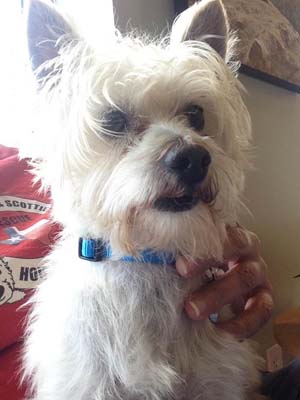 When Felix found himself in an SPCA shelter with a leg injury, things were not hopeful. Being a large, urban open-admission shelter, animals in the facility needed to be claimed by owners or adopted: there was no room for a dog requiring surgery or extensive rehab. Fortunately for Felix, he had a guardian angel who reached out to Westie & Scottie Rescue Houston for help.

The SPCA vet’s initial assessment stated that Felix had an old injury that may require amputation of the leg, however, Felix continued to use the leg and the vet reported that “Due to extent & chronicity of injuries, amputation may worsen prognosis.” Because the SPCA requires that animals be altered before leaving the premises, we requested that their vet staff take x-rays of the injury while Felix was anesthetized for surgery and they agreed, sending the radiographs to our vets at Bear Branch Animal Hospital. Together we coordinated volunteers to pick up Felix and get him to BBAH where, following examination and review of x-rays, he was referred to North Houston Veterinary Specialists and scheduled an appointment with a surgeon the next day.

It did not take long for Dr. Michael McFadden to see that Felix had a distal femur fracture requiring surgery to align the bones and a plate to keep them in place. We agreed with Dr. McFadden’s prognosis that Felix would have a much better quality of life with the leg repaired than having it amputated so we set the date for surgery on the following Monday and contacted WestieMed for help. Surgery is quite costly and Felix was just one of several high-needs dogs who came into our program within a very short period of time. In addition to follow-up care in the next eight weeks following surgery, Felix will also need dental cleaning once he has been cleared by the vets.

The surgery went well for Felix so now he is on the road to recovery. He is quite the trooper, walking around using the once broken now repaired leg as soon as he was awake. He will be required to remain in confinement for eight weeks following surgery with no jumping, running, or playing as terriers love to do, but he does get extra lap time as his foster mom goes through range-of-motion exercises with him daily to help him heal properly.

We are very grateful to WestieMed for being available to help Felix and so many other Westies. Thank you!

We recently received an update on our little Felix, now “Murphy,” from his forever mom and wanted to share it with the wonderful supporters of WestieMed.

Murphy has completely healed from his broken leg and was adopted this spring by a lovely lady who lives in a senior apartment complex. She reports that he is an absolute joy. He is very particular about his walks and has the walk of a Westminster Show Dog.

Although he barked at everyone he met at first, he now does not bark at all (unless he is surprised by someone) and is known and loved by all the neighbors.  She finished her note with, “I am so blessed to have this little guy in my life.”

Thanks to WestieMed, we were able to fix Murphy’s leg so he would be out of pain and live a healthy, normal life, a life that impacts more than his immediate family.