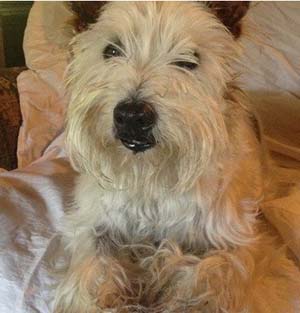 On September 15th, I was contacted by a local veterinarian who had been caring for Rory, an eight to ten-year-old Westie for the last couple of years. Rory suffered from severe allergies, skin issues and extremely serious ear infections, which she had been doing her best to treat.

Unfortunately, Rory’s owners were a special needs couple who were incapable of following through with the home care and meds that Rory needed between vet visits. They did not understand that some of his skin problems were the result of allergies to grain and were feeding him a very low-quality dollar store dog food that was aggravating his problems. Since it was clear that his owners, despite how much they loved him, were incapable of providing the daily care needed to help Rory to recover and live pain-free, the vet recommended humane euthanasia because Rory was in so much agony and his parents agreed. Then she called me and asked if we could rescue and help Rory if his parents would agree to surrender him to us. After discussing it with Gloria, we agreed to take him, and I agreed to foster him since I had experience with both skin and ear issues.

When we got Rory, he was in pretty bad shape and in a great deal of pain. His ears were so badly infected that they were bleeding, very swollen and extremely painful; the prolonged infections have destroyed most of his hearing. His skin was infected and had oozing lesions, and he was significantly underweight. Several large, painful interdigital cysts on his paws made walking agonizing for him. His eyes were inflamed and infection had clouded his lenses. It took two months, lots of meds, lots of medicated baths, a diet change and lots of trips to the vet, but we finally got Rory’s ear infection and the accompanying swelling to a point where the vet could actually see inside the ear. He discovered a tumor that was complicating the infection and after consultation with the specialist, it was determined that surgery was required as soon as possible. The specialist recommended a Total Ear Canal Ablation.

Rory has made a lot of progress in the last two and a half months. His fur is coming back, his skin is getting pinker, the interdigital cysts have resolved and he is back up to a healthy weight. However, his ears are still problematic and painful. Rory is a sweet, lovable little guy who is learning how to cuddle and every day he makes progress. He deserves a life that is free of pain. Although he has challenges, he maintains a sweet and loving disposition in spite of the constant pain he endures.

The grant from WestieMed for his surgery will be a miracle for this sweet boy and we thank you from the bottom of our hearts. I can’t wait to write the follow up after he has begun to heal and we see his personality blossom as he begins to enjoy a life without pain.

Rory is doing extremely well after the TECA (Total Ear Canal Ablation) which is such an invasive major surgery. There is no redness or draining at the surgical site, just a little swelling, which is less every day.

He is almost back to his normal “Happy Feet” self and I can see his energy levels increase every day. He really got through the surgery very, very well and is doing better than anyone, including the vet, expected.

He goes back to see Dr. Brown on the 23rd to have the sutures removed and we expect an excellent report. He is doing so well, in fact, that I’m going to try stopping the pain meds tomorrow and see how he does without them.

He’s eating well and wants to play. You can see him plotting his next round of shenanigans in this picture. He sure doesn’t act like a ten-year-old dog that just had major surgery. And he’s full of kisses. He even kisses his “sister” Queen Lola, (another WestieMed alumnus) every single morning.

Thank you again from the bottom of our hearts! This little guy is FINALLY, FINALLY pain-free after years of agony!

Where would we be without WestieMed?

Rory saw Dr. Brown last evening to have the sutures removed from his ear. That ear is well healed now, but we are still fighting on again off again infection in the other ear. Dr. Brown flushed and deep cleaned the other ear canal and we now have a new regime to try to keep the infections at bay. So more meds and flushes for poor Rory, but we must do what we must.

Unfortunately, the news on the biopsy was not what we wanted to hear. It came back as positive for Squamous Cell Carcinoma. The good news is that they believe that they got it all and that it did not penetrate the cartilage. That said, there is always the chance that it has already metastasized. For now, we are going to monitor his lymph nodes closely. Dr. Brown will be having a discussion with the oncologist as well.

Radiation is an option if needed, but it would be pretty tough on a dog as old as Rory is, and require that he be anesthetized for each of the eighteen treatments. He would also be required to spend an entire five days of each week of treatment at Cornell, and only come home on the weekends. It would be hard on him, and us as well. At this juncture, we don’t feel like that is something that he should be put through after all he has already endured. No decisions will be made until we have more information. At any rate, we are hoping that since the biopsy revealed that the tumor had not gone through the cartilage, that

There is also still a chance that he may require  TECA on the other ear unless we are able to lick this infection for good. It’s just gone on for so long that Dr. Brown isn’t optimistic. I’m encouraged about facing that prospect if it comes to it though, because of how very well he came through this one. He did really, really well, and healed quickly.

That said, Rory is like a different dog he is much more comfortable, full of energy and curiosity and loving life.

Thank you so much for helping this sweet old boy! He is a sweetheart and deserves to finally to happy, safe, loved and comfortable. He will remain with us, in his forever hospice home and be spoiled rotten and watched over by Her Royal Highness, Queen Lola.

With our deepest gratitude,

Merry Christmas and Happy New Year to all of you!