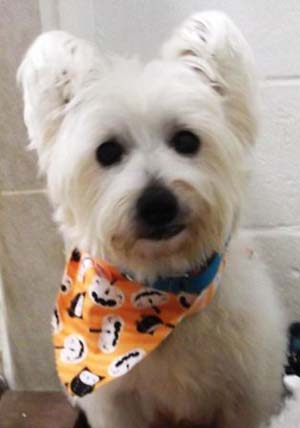 Snowflake is a senior Westie male who came into North Atlantic Westie Rescue’s program under tragic circumstances. One typical afternoon, Snowflake and his Havanese fur brother were waiting for their owner to come back from routine surgery. But instead, a stranger came and brought them to a shelter. Their owner had passed away and her family asked the shelter to take the dogs. Snowflake’s world changed, even more, when his fur brother died shortly thereafter due to diabetes complications.

The shelter staff knew Snowflake needed experienced help to ensure Snowflake would live the rest of his life in a loving home. So off went Rita and Tim, two of North Atlantic’s volunteers.  Within a day or two, Rita noticed Snowflake was very lethargic, had diarrhea that just would not get better, and he vomited a few times.  A trip to the vet revealed Snowflake’s abdomen was full of fluid, and his blood work showed elevated liver values.  In order to better get a handle on Snowflake’s condition, North Atlantic authorized the vet to perform an ultrasound and aspirate some of the fluid from Snowflake’s belly. The ultrasound did not reveal anything conclusive about why there was so much fluid in Snowflake’s belly. With each passing day, more fluid-filled in his abdomen. The vet recommended endoscopy be performed urgently, as further fluid buildup could lead to pulmonary and heart problems.

With a generous grant from WestieMed, Snowflake had his surgery.  The endoscopy revealed severe irritable bowel disease, but no cancer as we had feared. The doctor noted his intestine looked like “cobblestones!”  We suspect that Snowflake has been suffering from IBS for a long time, so the vet prescribed a very specific set of medicines to begin healing Snowflake’s gut. Snowflake, now in his adoptive home in Vermont, is improving every day.  With a consistent special diet and regular veterinary care. Snowflake’s prognosis is excellent!

North Atlantic Westie Rescue thanks the WestieMed board for enabling timely diagnosis of Snowflake’s condition. We also want to thank Rita and Tim for being vigilant and getting Snowflake the care he needed when he started to show signs something was wrong. He has begun his new life is his forever home with a solid treatment plan and a family with much love to give him for many years to come!

Thank you again for your help with Snowflake. Snowflake ended up having cancer and he passed away about four months after we worked with your team.