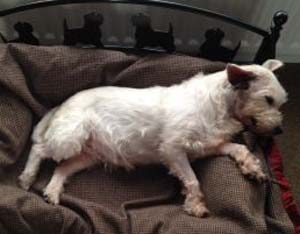 Hi, my name is Sharon and I’d like to tell you about a gorgeous little Westie named Betsy.

I previously adopted Sally (formally Phylan), a Westie, from Many Tears Animal Rescue and occasionally checked out the MTAR website to see how other Westies were doing.

I noticed a very small scared-looking Westie called Betsy on the website that wasn’t up for adoption because MTAR was trying to sort her ear infection/abscess out before she became available. She was an ex breeding bitch that was not treated for her ear infections, which lead to a blocked ear canal and a very large abscess. Betsy needed a major operation called a Total Ear Canal Ablation but the vet based near Many Tears Animal Rescue in Wales was unfortunately unable to carry out this vital operation on her because of the complications of the infection, abscess and the pain she would have to endure during. He suggested that she be put down

Sally Wallace, a long-standing fosterer for MTAR took on Betsy in the hope her local vet would be able to do the operation. Unfortunately, he was unable to carry out the TECA as he thought it would be far too painful for Betsy to be put through. The only solution left was to put Betsy up for adoption on the understanding that she may only have days, weeks or months to live and to have a final chance of as much pain-free peace and quiet, in a loving home, as possible.

I happened to check the MTAR website a few days after she was put up for adoption and my heart went out to her instantly. Reading her prognosis cemented my resolve to give her the best possible end to an otherwise neglected and painful life. I have two other Westies and they instantly took to Betsy when I visited Sally to collect Betsy.  The very next day I took Betsy to my local vets called Newnham Court Veterinary Hospital to register her and have her ear checked over. Blood tests were taken and it turned out the infection in her ear was a nasty one (MRSA) that is resistant to all antibiotics bar one, which is injectable only. On hearing this I thought it would be all over for her but it turned out this practice had a specialist in ear complications such as this one. Martin Smith BVSc MMedVet (Med) CertVD GPCert (EM&S) MRCV is the specialist that saw Betsy and confirmed that he could do the operation. Because of this nasty bacteria that has infected Betsy’s ear, it would make the operation particularly difficult to do, due to removing as much of the infection as possible. There was also the possibility of facial nerve damage during the operation because of the very large abscess, scar tissue and possible growth around the facial nerves. The nerve damage would be cosmetic only and would not affect her quality of life. The ear canal had to be removed because the ear was completely blocked and the infection was trapped inside the inner ear and had burst through the inner ear wall to below the ear lobe causing the very large abscess.

The initial quote for the TECA operation was about £2500 including medicines required. She needed the operation ASAP so, on the advice of Mrs. Sally Wallace, I set about starting a Go Fund Me page. With the help of the Westie community on Facebook, Sir Hamish McTavish Westie Rescue Fund, Westies Rescued UK and many other very generous people the donations to date have reached £2855. The vet’s bills have so far totaled £5,450 due to her staying in the hospital for two weeks following the operation trying to fight the MRSA. The MRSA infection has been eradicated but she has another infection that’s taken its place. Luckily this is treatable with antibiotics at home. She also recently needed a small piece of the ear lobe tissue removed because it wasn’t healing as expected. It’s been so painful for her to have her ear flushed clean that she’s been sedated for each one.

With the vet bills mounting each day I had to ask for help from WestieMed. I wasn’t guaranteed funding so when I received the email saying that the Board of Directors had approved funding and the full amount available, I broke down in floods of tears. I am eternally grateful to WestieMed for helping me to help Betsy.

I was expecting not to have Betsy for very long but it turned out she had a chance of recovery and a possible fulfilling life ahead of her. This is meant to be for Betsy. Her journey had bought her to one of the very few vets in the country that was willing and able to carry out this type of operation with the complications and increase her chance of survival. (Nothing was guaranteed).

Betsy is now recovering at home and her ear still has a way to go in the healing process but this has not stopped her happy sweet nature and she sure loves her hugs and kisses.

I owe a great debt of gratitude to so many loving and generous people. Thank you to all who have helped Betsy and all the other Rescue Westies out there around the world.

Sorry I’ve not got back to you. I’m in the middle of moving from Kent to Somerset, starting a new job and it’s hectic.

Despite all the vet’s efforts, Besty didn’t make it. She went in for an operation to open her up further because the infection just kept coming back and the drugs were being changed to tackle it regularly. We ran out of options.

When she was opened up, it was found that the infection had spread down her neck and under her chin to her other ear. I got a call while she was on the operation table and still under anesthetic to say it would be kinder to put her to sleep. It was devastating but the right thing to do for her. I cried my heart out for her.

I can honestly say I’ve never met a dog like her and no other dog will ever match her. I miss her so much every day.

Thank you for your help and I’m so sorry that she didn’t make it. Without your help, I would not have been able to help her as much as I possibly could. We really did take it to the last hope.

Thank you from the bottom of my heart.