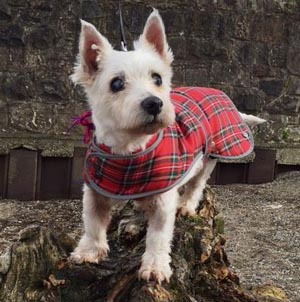 Angus was first found by a lovely lady named Anne-Marie Dimi Marcu. She works in animal rights in Romania trying to stop the cruelty in these shelters. I know of her work through Facebook. She came across the Constantina public shelter and took pictures to show us how bad it was. Lo and behold tucked away and looking scared was a wee Westie.

As soon as he was spotted, Carol Riches from Westies Rescued UK was contacted. Carol put all the gears in motion to raise funds and bring this boy to the UK.  Maria got him to a vet in Romania to be assessed for his pet passport. He was in a bad way. He was shaved and then given a bath. He was sprayed with a blue dye antiseptic spray as he had been bitten by other dogs in the shelter.

Once he was sorted out he was ready to go to his foster mum Maria for some much needed TLC. Maria bathed him and administered his medication while we were waiting for him to be transported to the UK. The time came and the start of his new journey began. Angus was put into a crate and transported with other dogs by road from Romania then via Eurostar to Liverpool, UK.

In Liverpool, he was met by his first foster mum Denise. Denise gave him lots of love and care. Unfortunately, Angus didn’t get on with Denise’s two Westies and went to his second foster mum Nicole in Galashiels, Scotland. Again, there was a problem because Angus didn’t like Nicole’s Westie “Jimmy” and it was causing Jimmy stress.

It was then I was contacted by Carol Riches as I had fostered before and was a huge fan of Angus. I agreed to take him and two days later I finally had him in my arms. He felt amazing to hold him. He was so soft and gentle considering the life he must have had.

The first thing we did was to have him seen by a vet and get him checked over. We knew his eyes, ears, and lungs were bad, we just didn’t know how much. It was confirmed that Angus has Westie Lung Disease, an ulcer scar in one eye and one unstable ulcer that could rupture at any time. His ears were also very blocked and dirty inside.

While Angus was under anesthetic having his chest X-rays, the vet syringed his ears and this helped get the ear medication to where it was needed. His ears are now very good. He can hear a treat bag rustle a mile away!!  Angus is now on meds for his lungs and itchy skin.

Life was good. My partner and I took him on lots of trips to show him his spiritual home. Angus loves traveling by bus and car. We took him to Loch Lomond near Balloch, the beach, the park and even out to dog-friendly bars. I also take Angus to the care home to see my mum and dad. He loves it and gets lots of cuddles off the residents. He gives my mum and dad lots of kisses.  While I’m at the shops, Angus likes being a lookout, staying in the car and listening to football. We also finally met Carol Riches, from Westies Rescued UK. The lady who got Angus to the UK.

On the morning of the 22nd April 2016, I went to give Angus my usual good morning kiss and cuddle. However, he was unusually quiet. When I felt his face it was wet down one side. I realized the ulcer had burst. I rushed him to the vet and he was taken straight away for emergency surgery to remove his eye.

Angus did not let this hold him back. He is now almost blind because of the ulcer in the remaining eye. He just has a slight peripheral vision.

We decided to get him back on track ASAP as we didn’t want him to lose confidence. We took him to the park. He loved it!! He is too cute!!

He now is learning to walk with a halo. It stops him from bumping into things. I got him a sign for his lead that says “Be Kind, I’m Blind”. He gets more hugs from strangers than before now. He loves it.

Angus will be going back into surgery on the 20th of May for dental work. His teeth are quite bad because of neglect. A lot needs to be removed.

He will also need a follow-up X-ray of his lungs to see how the Westie Lung Disease is progressing. We’ve been told it’s quite advanced but they need another X-ray in a few months to compare.

While on vacation in Scotland, WestieMed board member, Sara Studebaker, was able to visit with Amanda and Angus.

Sara stated “We only had time for a short visit, but Angus is a cutie and FULL of Wesitietude!!