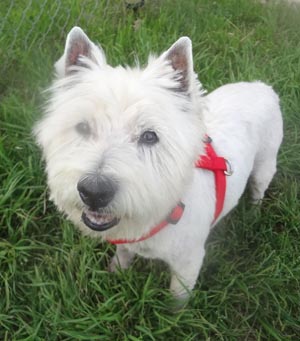 I received a call from another rescuer about a Westie that was in a shelter north of Austin. He was found wandering the streets and nobody came to claim him. I was told that while he was at the shelter there was no interest in him and if a rescue didn’t take him he would be PTS (put to sleep). We agreed to take him, coordinated to meet and I made an appointment for this guy at the vet. When I met up with the other rescuer, she said the shelter hadn’t mentioned anything but she thought he had Kennel Cough.

I had already chosen the name Kenner before meeting this Westie. I was taking Kenner straight from this meetup to the vet appointment previously made. It was about a twenty-minute drive which gave me time to listen to his cough. Within minutes, my instincts told me that this was NOT Kennel Cough but probably Westie Lung Disease (Pulmonary Fibrosis).

Between his unknown length of street time and his cough, Kenner was a pitiful sight when he first came into rescue but he had the sweetest disposition and put up no resistance as the vet checked him over. This was the same vet that had treated a prior Westie of ours with Westie Lung Disease and she agreed with my instincts. Sadly, our instincts were confirmed.

We made the decision that Kenner would be a forever foster of Westie Rescue Austin. He has been with us since October 2012 and doing well with his meds. He gets along great with the other furkids in the house. He monitors all activity in the kitchen and thinks the oven exists only to bake dog treats. He can be sleeping soundly in the bedroom but appears instantly in the kitchen when the kitchen light is turned on. Kenner has never been active but does enjoy being outdoors when weather permits (i.e., not too hot or humid). He doesn’t demand attention and will occasionally sit in my lap for a brief spell (and actually seems to beam with pride). Kenner also suffers from ongoing skin issues and heart disease. Recently it became obvious that he was having some issues and his dogtor confirmed his heart ailments were becoming more progressive and now requiring medication.

Kenner is such a gentle soul but as his dogtor says he is a fighter. Sadly, we know he won’t win this battle against Westie Lung Disease but we will continue to love him, bake him dog treats, and keep him happy.

I was hoping to be providing a good news update for Kenner. Sadly, he made his trip to the Rainbow Bridge today (11/7). the dogtor is fairly certain it was not Westie Lung Disease but cancer-based on his bloodwork.