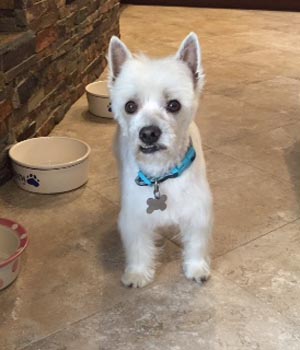 On March 14, 2016, we received a call from a panicked owner who had planned to relinquish Brody to our program the following week. Brody, a three-year-old Westie belonged to the relinquisher’s mother who had recently passed away. According to the owner, Brody was panting heavily, couldn’t walk, wouldn’t eat and overall, seemed unresponsive. She said this happened overnight and she requested the dog be relinquished immediately instead of as planned because she was unequipped to care for the dog. She sent over a video and needless to say, Brody was on death’s door. We had her meet us at our vet immediately and she signed him over to us, never to hear from her again.

Brody remained hospitalized for nine days receiving immunosuppressive drugs to stabilize him. Once he was stabilized, he was seen by another vet for a second opinion and had an MRI done. The consensus from both our vets points to Granulomatous Meningoencephalitis which is an inflammatory disease of the nervous system. The onset of symptoms is usually rapid and without treatment, it is life-threatening. The inflammation results in granulomas, which are clusters of cells that form when the immune system tries to build a barrier against foreign substances. Depending on the location of GME, symptoms include neck pain, a rigid stance, and reluctance to move, loss of function of limbs and loss of vision.

GME is considered to be idiopathic, which means we don’t know why it happens. However, there is also a suspicion that the disease may be caused by an abnormal immune response to an infectious agent. We may never know what triggered his immune system meltdown, but we feel as do our vets that his prognosis is very good and he has made an amazing recovery.

Without immediate treatment, Brody would have no doubt lost his life. To keep his symptoms at bay, Brody will continue on prednisone and Atopica and monitored very closely. Today, he walks and he runs; sometimes dragging his feet but he is one very happy and very lucky little boy! He is goofy, always in the middle of all the action, loves his walks, adores food and is especially fond of his other Westie companions.

It took a lot of time, patience and financial resources to get Brody back on the road to recovery. Thank you so much WestieMed for making it happen!

Brody passed away on December 3, 2016, in the arms of his adopters. He was with them for three months.