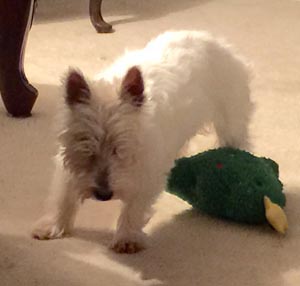 As I was messing around on Facebook one night, I got a message and photo from my sister-in-law, Casey.  The picture was of a little white dog at the Metro Nashville Animal Shelter for adoption.  The little dog was pretty bedraggled and looked very small and afraid.  She was female, spayed and not much other information was known about her.

Casey and I conversed a few minutes, and I told her I’d contact Westie Rescue AL/TN to see if they could get her released from the shelter and into a foster home.

I sent a Facebook message to one of the officers of Westie Rescue AL/TN and inquired about this little girl.  She said she knew about this dog and a couple was going to the shelter to try to adopt her within the next few days, but it was not a definite situation.  She said the Rescue did not have any foster homes available at that time and there wasn’t anything they could do unless a forever foster home could be found.

I talked to my husband about the little dog and showed him her picture.  We were currently in the process of trying to help another Westie, and it didn’t look like that situation was going to work out.  We both felt that this little dog at the shelter needed us more than the other dog, and maybe she was the reason the other situation wasn’t working out.  I wrote the officer back and told her if she could get her out of the shelter, we would adopt her.  She was overjoyed and said she would start working on it the next day.

Unfortunately, the shelter was closed until the following Tuesday.  The officer was able to contact the shelter and go see this little Westie.  When she got there, she discovered the dog was both deaf and blind.  She called us to see if we could handle this situation since it was going to be more than we had anticipated.  We decided we would still adopt her.  I arranged to meet the officer to meet the little girl and met them early in the week before the adoption.

The little girl had been checked out by the vet at the shelter, and was found to be heartworm negative, blood work was all good, needed a dental cleaning, and had some skin issues.  She was soon on the way to the Rescue’s veterinarian, with a quick stop to see me on the way.

This baby looked SO bad.  She had a very thick, black crust underneath her left eye.  She was very scraggly and dirty, and she smelled so bad there were flies around her.  She was walking in circles at the end of the leash and confused.  I picked her up and held her, and I could tell she was very sweet and needed a lot of love.  She needed someone to trust to take care of her.

She had been found in a neighborhood in Nashville, Tennessee, by a woman who had called Metro Nashville Animal Control to come and pick her up.  Her next-door neighbors had a Westie, so she knew she was the same breed.  Apparently, they gave the shelter their contact information, because the Rescue officer was able to contact them.  She had been at the shelter for almost a week when I saw her picture.  After we adopted her, the officer told us the neighbors put a story about her in their neighborhood newsletter and collected a donation for Westie Rescue to help offset her vetting.  The officer let them know that she had been adopted, that her name was now “Renni”, that her Irish name means “small, but mighty”, and she was going to a good home.

Renni was at the vet by this time.  They did a thorough exam, found a slight heart murmur, gave her a dental cleaning and removed 5 teeth, bathed her and treated her skin issues, prescribed three types of eye drops for her eyes to be given twice/day.  She had a follow-up visit for two weeks.  After the follow-up visit, we could give her a bath.

She does not like riding in the car.  She fought like a little tiger until she wore herself out and went to sleep in my arms.  We decided no more car trips until the follow-up vet visit.  We got her home, introduced her to our other Westies:  Duncan, age four; Connor, age three; and Brody, age one.

They are leery of her, and can tell she is ‘different’.  They mostly avoid her whenever she gets near them, but they are slowly accepting her into the fold.  They are ‘concerned’ when she gets upset, and come to check on her to satisfy themselves that she’s ok.

We suspect that Renni belonged to a gentleman, who possibly passed away.  She became attached to my husband very quickly, and he became attached to her as well.  We have no way of knowing how she ended up on the street, or how long she was on her own.  It breaks our hearts to think of her alone, in the dark, in her own darkness and silence, not knowing where danger was lurking, trying to fend for herself to find a safe place to sleep and something to eat.

She is very thin, all the bones in her spine can be felt, as well as her hip bones.  Her rib bones can also be felt.  She is having a difficult time gaining weight because she walks so much.

The vet initially thought she had dementia, but we determined after her first night at our house, that she was ‘mapping’ her surroundings.

She walked the perimeter of our great room 30-50 times without stopping.  The first several trips around, she bumped into everything.  After several times, she was able to dodge more and more pieces of furniture, table legs, corners, etc.  When she finally had navigated the room with no collisions, she rested.  She learned where the food and water bowls were located and could find them easily.  She learned where my husband was sitting and would pass by him for a quick rub, just to get her bearings.

The next morning, she was able to remember everything she had learned the previous night. Renni did not have dementia!  Way too smart for that!  She started learning the next room and moved on to the next and the next.  She still has trouble with the dining room table and chairs…too many legs, too close together.  That’s understandable.

She LOVES to be outside for potty breaks.  She’s getting more comfortable being in her yard.  Her first time in the backyard, she took off like a trooper and explored the whole fenced area.

She had a ball and didn’t want to come back to where we were.  The other dogs were playing in the pool, but she couldn’t go in because she couldn’t get wet yet.  We have tried her at swimming since the follow-up vet visit, but she doesn’t care much for it.

We are hoping after Renni’s cataract surgery, with her vision restored to 95%, she can enjoy being in the pool, will want to play with toys, will be able to get along with the other dogs, and navigate better in the yard.  Balance is an issue for her without her sight on uneven ground.

We are anxious for her to see our faces as well, so she knows who is loving her, kissing her face, stroking her back, feeding her, etc.

With your generous help, all this will be possible for her after the cataract surgery.  From the bottom of our hearts, THANK YOU so much for all you have done to help this precious little girl.

She has been a huge blessing to us as we have learned how to communicate with her and help her adjust to her new life and surroundings.