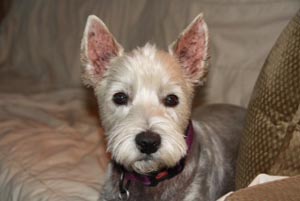 Murphy is an eight-year-old Westie. When his owner died he was passed around between family members for a couple of weeks while they decided what should be done with him. They then contacted our rescue to see if we would be willing to find him a new home and I agreed to take him into foster care. When I picked up Murphy the first thing I noticed was the horrible smell he had. I immediately washed all of his belongings but it didn’t help. Murphy also had substantial hair loss and darkened skin on his neck, chest, and sides so I took him to the groomers the next day and had all his hair cut off. What lay underneath was a red dog. All of his skin was red, inflamed and burning hot. The dark areas of skin were moist and purulent and he still smelled awful. He also started to limp so I ran him into the vet. There was nothing visibly wrong with his leg but he had an enlarged lymph node on that side.

The vet was horrified at the state of his skin. Murphy had arrived to me with two medications and some ear drops but clearly none of that was working for him so Murphy had skin scrapings and blood work done to see if that might render any clues. The skin scrapings showed Murphy definitely had lots of yeast growth on his skin but nothing else was abnormal.

Murphy was prescribed an antibiotic for the lymph node and possible underlying skin infection, an anti-fungal medication along with daily anti-fungal baths. He received Apoquel as a type of anti-inflammatory and new ear drops. He was also started on a new protein source food. We are trying this regime for a month to see if Murphy’s skin can be restored to something close to normal. After just ten days I can tell Murphy is a new dog. He is running and playing with his toys and barking at anything that comes near the house. He no longer limps or spends any time scratching or chewing himself and only occasionally shakes his head. Clearly we are on the right track. Murphy will still have to undergo more blood work to ensure the drugs are not having adverse effects on him and he will also have to maintain a strict diet until we can determine what items he can tolerate. I know he is missing his carrots!

Murphy lives peacefully with my pack of two large dogs and four cats. He is a little bit too interested in my rabbits (he is a terrier after all) but is called off quite easily and he is completely non-destructive when left alone. He could use a bit more training however, so I have enrolled him and me in the Canine Good Neighbor class starting in September. Hopefully, his new owners will continue with his training.

This past weekend Murphy came with me to a pet exhibition held in our city of Victoria, BC. He was just fantastic.  He was happy to meet people and dogs alike and at one point tossed himself off his stubby little legs and onto his back in the middle of the walkway in order to receive belly rubs. He became a bit of a celebrity at the event and I have heard that people were looking for him after we left. We are confident that Murphy will now have an excellent quality of life and that we will be able to find him a wonderful home where he will receive the love and care he deserves.

The Greater Victoria Animal Crusaders would like to thank WestieMed for supporting our efforts to make Murphy a happy healthy dog. Your help is very much appreciated.