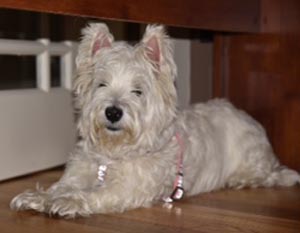 Chloe is a typical 6-year old Westie with plenty of Westitude, she has the most charming prance, head held high and a proud gait, we call it “going to the White House”. She comes from an incredibly loving family that has had her since she was a puppy and due to life changes they made the heartbreaking selfless decision to surrender her to rescue so that she can have access to the medical care she needs and be in a more stable environment.

When she was one and a half she began to scratch her ears and cry, the vet put her on antibiotics and Prednisone along with ear drops. For the next four years, Chloe experienced recurrent ear infections. As the vet explained, long-standing ear infections can result in irreversible damage to the ear canal which is exactly what happened with Chloe. Due to chronic inflammation, the ear canal became thickened and turned into bone. As a result, Chloe’s infection cannot be treated with medication.

By the age of five Chloe’s ears completely closed; for anyone who is not familiar with this the only way to describe it is to say her ears looked more like a belly button. However, even though her ears were closed, the infections continued, resulting in the formation of an abscess in her cheek that needed to be opened and drained. The vet informed her mum that Chloe needed a double ear ablation- surgery in which the diseased ear canals are removed entirely.

With the help of WestieMed Chloe is getting the surgery that she needs. Prior to surgery, Chloe has been put on a strict diet – prescription food, water and no treats (poor girl no treats!) The vet said that potentially she could have severe allergies adding to the inflammation in her ears. Until we can narrow allergies she will not even be receiving oral heartworm meds because of the flavoring.

Prognosis is very good post-surgery. The hope is that Chloe is going to feel like a “new dog” and might be acting more like a puppy again. The vet said that typically a dog that has chronic deep-seated ear infections like Chloe will be much less active than a normal dog because they do not feel well. Once she receives the surgery infections are most often times cured permanently.

From her adopters/new forever family:

She has settled into our household and is a wonderful, playful, funny and in every way great dog. Our household now includes my son’s rescue dog “Moose.” Chloe and Moose are BFFs – they watch out the windows together, take a long morning walk together and usually race out to the back yard together.

She had a dental cleaning a couple of weeks ago – she didn’t need any extractions just cleaning. There was a small mass in an area of her gums which the vet removed and sent for biopsy. He didn’t expect any serious problem and turned out, fortunately, there wasn’t.

She is really comfortable in her new home and not as needy of me as she was in the first months. She may snuggle up for a nap. She still likes to hop up on the back of a chair or sofa and nap right beside one of her humans who happens to be watching TV or reading a book or whatever.

She is great with people, including visitors – no snapping, growling or any kind of aggressive behavior. We will soon be going to the Cape more often so I will stop by to see Kathryn and so Kathryn can visit Chloe. Oh, I meant to mention – she is one of the lucky 10% of dogs who have had ear ablations but still have some hearing. She turns towards sound and responds to a call of her name. She also sits and waits for her meals and sits for a treat.