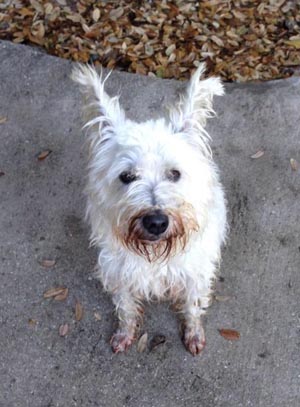 Lucky is a six-year-old Westie that ran in front of our van, sat down and stared at us. My husband opened the door and he jumped right in. It was obvious he had been on his own for a while. His fur is severely matted and even after a professional bath, he is still brown with dirt. We immediately took him to a vet and had them do a check up on him and check for a microchip. He was hookworm positive and we treated him for that ailment. He is also heartworm positive. When we got the estimate for the treatment, we were heartbroken. We knew we couldn’t afford to pay for it. Our kids were devastated, as they had already fallen in love with him.

We brought Lucky home and after he was cleared of the hookworms, we introduced him to our Foxhound, Scout. She needed a friend and they quickly became just that – friends! They run together, play, chase rabbits and even eat together. Lucky fits into our family immediately.

We reached out to the San Antonio Area Scottie and Westie Rescue (SAASWR) and told them our situation. They directed us to WestieMed and thanks to this wonderful organization, Lucky will have a second chance at a healthy and loving life! Thank you!

Lucky is doing great!! We took him for a haircut and found out he was mistakenly listed as a Westie and is in fact a Schnauzer!!

He is older than we originally thought also but he loves living with us. He loves my daughter and follows her around. He also sleeps with her.

He has a “sister” named Scout that is a Foxhound mix. I am including a picture of them both. They get along well and play most of the day.

We really appreciate your assistance with Lucky’s medical bill and mostly for your patience through us figuring out which treatment was best for him.

You are a blessing!