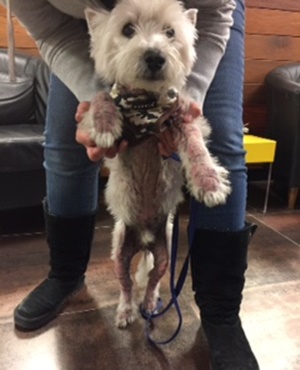 On November 29, 2016, we received a call from a woman who stated that her daughter has a Westie that she wants to euthanize due to his skin problems. She sent pictures of the dog and the neglect was so severe that we asked her to bring him to us the very next day. Wally arrived in terrible shape. He was grossly underweight and every bone in his body protruded through. For a dog his size, he should be about eighteen pounds. His eyes were covered in discharge and he screamed when his ears were touched. He smelled so badly and it was quite obvious this dog had never been bathed. By the time we got home, his car seat was covered in yeasty crust.

Wally was taken to our vet the next day to treat his ears and eyes, blood work and a skin scraping to rule out mites. His ears were full of bacteria, rods, and cocci. His dental was put off for a while so he had a chance to heal and gain some strength. Yesterday, his dental was done and he was found to have many fractured teeth and the roots were rotted and some parts missing.

On top of being incredibly sweet, this little guy is a trooper! He is so appreciative of his baths and absolutely loved getting all the muck scrubbed off. He is looking better and better every day. Someone is going to get an amazing dog! Wally’s care has been costly! Unfortunately, such neglect requires extensive medical care.

It took all of two months to get Wally back to his normal self after such a long period of neglect.

In January, Wally was adopted and joined a family with two other Westies. Wally is on the right.

Though he still has an occasional skin flareup, his Mom and Dad stay on top of his care and as such, he has grown a beautiful full coat.

Thank you WestieMed for sponsoring Wally!