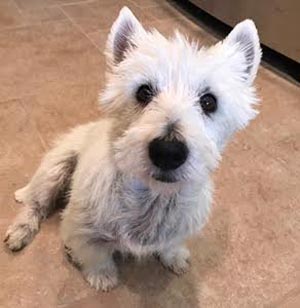 Nemo came to us in terrible shape. He was found as a stray and picked up by animal control.  The shelter contacted the owner and his owner said they gave him to another family member.  When they were contacted, they stated they did not want him anymore.  Nemo was found over 100 miles from his “home”.  It was revealed that Nemo was left in a cage for most of his existence.  As a result, Nemo had fourteen broken and fractured teeth from trying to chew his way out.  This is no way to live!! The shelter asked us if we would be willing to take him on as his skin was a horrid mess, his eyes were infected and so were his ears and were coming down with kennel cough.  He was in such bad shape that the shelter thought this two-four year old was a senior!   For several weeks, we worked on his skin with medicated soft brush baths and medication.  Just recently, we had a complete dental done on Nemo and our vet said that based on the lack of calculus and tarter, Nemo is believed to be around two to for years old at the most.   Well, this makes absolute sense because fostering Nemo is like fostering a puppy!!   Nemo has been with us for several weeks and already has shown vast improvement.  His skin is healing beautifully with the help of medication which he is no longer taking and medicated baths twice a week.  His coat is getting thicker by the day and his skin issues were caused simply by neglect.  Tender loving care, nutritious meals and a routine he can count on is all he asks for.

Nemo is the sweetest boy around!  He gets along with all his foster and resident siblings and does his best to get someone to play with him.  He keeps himself entertained by laying on his back, tossing toys up in the air and he loves to eat!  He loves the dog park and sleeps soundly in his crate at night and gets run of the house during the day.  Nemo will be ready for his very own home soon but the cost to get him this far has been substantial.  It can take a lot of money to reverse all the neglect caused by others, but thanks to WestieMed, Nemo has received everything he needs to start a brand new life.

Karen and Kay (Westie Rescue of Orange County & Beyond)

Our sweet Nemo was adopted by Paul in May. He looks absolutely stunning and is doing extremely well.

His new dad reports that he loves car rides in his new car seat, walks perfectly on a leash, and he completed obedience school with flying colors. Nemo loves to throw his toys in the air with his nose and catch them without a worry in the world.

Years of neglect came with expensive veterinary bills and we couldn’t have done it without you.

Thank you WestieMed for all your help with Nemo!