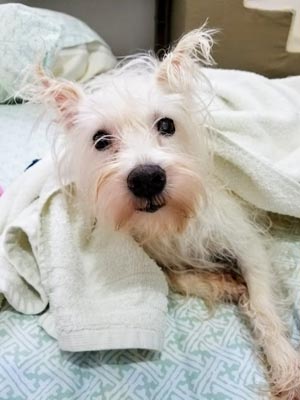 In late June, I signed on Facebook to find that several of my many Westie loving Facebook friends had sent me, Director of Westie Rescue NYC, a link to a tiny seven-year-old Westie mix who had come to find herself abandoned in the NYC shelter. Her name was Selena, and she weighed only eleven pounds. She came from East Harlem, NYC, having been brought to the shelter by a neighbor of her owner after her owner had become too ill to take care of her. Well even in her bedraggled state, she looked cute-as-a-button in her intake pic. I knew I could not leave her there even after the shelter informed me that her teeth were very bad and that she had arthritis. She also had cataracts, but at that time, I didn’t know that she was practically blind. Selena’s condition put her into a precarious position. If the right person or rescue did not come along who was willing to take her, Selena could very well be put to sleep. Of course, I took her home with me!

The good news was that Selena had already been spayed before going into the shelter, so she didn’t need to have that operation, which meant that I could bathe her right away. Cute-as-a-button though she was, she was also very, very stinky!

More good news! The stains on Selena’s front teeth had made them look to be much worse than they actually were. After a dental that required only three extractions of tiny front teeth, Selena had a movie star smile to match her fantastic personality. And she showed few signs of arthritis. Almost immediately I had a potential adopter lined up for her.

Selena proved to be one sweet, sweet dog who loved nothing better than to be right by my side. She immediately got along well with my twenty-year-old cat and with one of my Westies, twelve-year-old Missy Paulette, who is usually very jealous. She didn’t get along as well with sixteen-year-old Casey Jane, but then no one does except Missy Paulette. When Casey Jane snapped at Selena, Selena didn’t snap back. She would only try to move out of the way. But Selena kept getting into Casey Jane’s way, and so I began to suspect that maybe she couldn’t see very well.

Soon it became more obvious that Selena could not see very well. When walking, if not watched, she would walk right into a building or off a curb. At home, she liked to stay in one place either on the bed or on the couch. When I would come into the room, she would gaze towards me, with an inquisitive unfocused stare.

Selena’s adoption fell through. The couple that was going to adopt her did not feel able to take on an almost blind dog.

By this time, I had fallen in love with Selena and I knew I had to find a foster home for her quick. Not only was I working long hours, but with three senior pets of my own, keeping her was not the right thing to do. Luckily, a wonderful foster home was found and Selena’s foster mother will continue with her story.

During the first week in August, Monica posted Selena’s story and photo on Facebook. I knew Monica already had two senior Westies, so I offered to foster Selena.  When Selena arrived, I took my Westie, Milo who is also a rescue, outside to meet them and go for a nice walk in the park right across the street. Milo took an interest in Selena immediately, and so did I. She is a little love bug. And when we met up with a friend of mine who spoke to her in Spanish, Selena’s ears perked up.  We realized at that moment that she is bilingual.

Selena settled in with us quickly. I noticed a difference in just a few days.  Her appetite improved, she loves her treats and she loves eating out of Milo’s bowl, even though she has one of her own!  She is a feisty little thing, very funny and a real charmer. All she wants is to love and be loved. I know she can’t see, but she looks at you as if she is looking into your soul. I now call her Lena. Here she is with Milo.

It was clear to me from the beginning that Lena couldn’t see well because she bumped into things a lot. She has walked into my front door head first.  When we got into the building elevator, she couldn’t see and her foot slipped down between the cab and the elevator shaft! Fortunately, I was able to pull her out quickly. It was so scary. And she has trouble seeing the edge of the steps forcing me to continually lift her up with her harness. Unfortunately, I walk with a cane that she bumps into and walks in circles around. I have tripped over her twice. She walks very close to me because she can’t see where she is going. After learning that WestieMed may be able to help with the expense, I took her to the ophthalmologist to see whether anything could be done for her to improve her sight, her quality of life and to increase her chances of being adopted. The vet confirmed that Lena has cataracts and they would only get worse, but they are operable. Lena is only seven and she is healthy other than that. Getting her cataracts removed will be life-changing for her.

Well even though she and I keep getting tangled up, Lena has made it very clear to us that she is happy in our home, and she doesn’t want to go anywhere else. I have watched her bloom in a short period of time. She has taken a liking to all of Milo’s soft toys, destroying quite a few of them, because she loves to rip the stuffing out!  Milo doesn’t mind, he would rather play with his ball anyway. The two of them enjoy one another’s company and get along perfectly well together. Lena does love being the center of attention, and sometimes I do need to remind her that she is not the only dog in the house. I am so very pleased with her progress. I very much look forward to the day when her sight is improved, because Milo and I love her and hope to adopt her once her eyes are fixed. Thanks to the generous grant from WestieMed this now looks very possible.

Selena (now Lena) is doing very well since her surgery in January.  She has been back to Cornell for two follow up checkups and passed with flying colors.  The doctors were very pleased with the outcome.

When I first got Lena, she would cry like a banshee every time she went out for a walk. Since the surgery, she has calmed down significantly.  She has gained a great deal of confidence.  In the past month or so, I have really seen a difference.  She jumped off my bed onto a pillow so she feels confident enough to get down by herself.  This past week, when I take her to the dog park, she has ventured out to meet other dogs rather than just sitting on my lap.

Everyone loves her.  The nurses and doctors adored her. My other dog, Milo, had been her protector and big brother.  They have been getting along very well.

Everything has worked out beautifully thanks to the help that WestieMed gave us towards her cataract surgery.  It made a huge difference for Lena.  I can’t thank you enough.  I will send you a photo shortly.