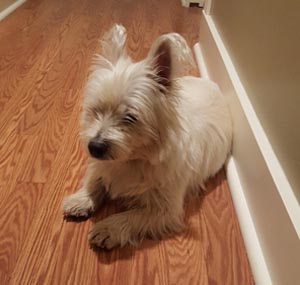 We have been a Westie owner for over twelve years and have talked often about adding to our family. We thought helping a Westie in need would be rewarding for both ourselves and whoever we rescued. So I became a member of the Westie Rescue of Missouri Facebook page and followed many beautiful stories of rescues finding their fur-ever homes. I hoped someday we would be as lucky.

About 2 weeks ago WRM posted that an eight-year-old Westie (Barkley) was in a shelter in Kansas and needed immediate help. Since the shelter would not release Barkley to WRM they asked if anyone could rescue Barkley from the shelter. I didn’t even have to think about it, I immediately said I would go.

The shelter is three hours from my home so I made a call to the shelter to see if he was still there. They called me back at closing and said he was and that I should call back in the morning when they opened. If there was no one there at their doors first thing when they opened wanting to adopt Barkley, I would get to adopt him. So I held my breath and called first thing. He was still available! They took all my information and my daughter and I jumped in the car to pick him up.

The family that surrendered him said that since they had four other dogs, they couldn’t give Barkley the proper care and attention he deserved. He was neglected physically. He was in need of a serious bath and grooming. He had several hot spots from a previous flea issue and allergies.

We noticed immediately that he had a really good disposition despite the situation he was in. We did not have to coax him in the car. He jumped right in as if to say “Please get me out of here!”  He settled right in for the 3-hour ride home. He was a perfect angel.

Once we got home later that day we noticed he was drinking excessive amounts of water.  My other Westie never drinks that much so I wasn’t sure. I had already scheduled a vet exam for the following day so I made a note to discuss the water drinking. The next morning we took Barkley in for a bath and groom then on to the vet.

Our vet was concerned as well about the excessive water drinking and ordered blood work to test for diabetes and Cushing’s disease as well as other parasites. The blood work results would take 24 to 48 hours. She gave him a couple of extra immunizations that he was missing and prescribed an itching medication for his skin issues. He also has bad dental issues that will be addressed very soon.

That night Barkley started throwing up and diarrhea.  I thought maybe it was the stress of being in the shelter and now another new environment. As well as the immunizations. So back to the vet the next day. He had no temperature so she agreed it was probably stress. So she gave him a shot for nausea and medication for diarrhea. She put him on prescription bland food for a few days. She said the blood work results came back negative for diabetes and Cushing’s yet his SDMA levels were elevated which might indicate a kidney issue. She will retest him in thirty days.

Within twenty-four hours his vomiting/diarrhea stopped and he backed off the excessive water consumption. We are slowly transitioning him to healthy permanent food. We hope the new food and better grooming will help with his skin issues.

He is what I would call the typical Westie. Major Westitude and stubborn for sure!  LOL. This is new to us because our Chloe is the most obedient Westie ever. I was able to train her from two months of age.  He has no manners so we are working on this. We figured his surrender family did not train him properly so even though he is eight years old we are teaching him some basic manners.

He and Chloe are getting along very well. They are about the same size. She’s a small fourteen pounds and he id twenty pounds. He’s not as spry as Chloe even though he is four years younger and the first couple of days walked around like an old man. He was very scared and could not go down our stairs at first. It took him a week but he has now learned to go down them.

It has now been eleven days since we adopted Barkley.  We are happy to say we are seeing more energy and interaction. He’s more playful and likes to talk LOL. Our Chloe rarely barks and Barkley definitely lives up to his name!  He talks to us in this low voice when he wants something and if we don’t answer him, he will bark. The talking is really cute but we will be working on inside voices LOL.

We are so very thankful to WRM and WestieMed. The vet bills in the first three days were more than expected and the future major dental work was going to be a strain. WestieMed has agreed to help with the expenses and we are so very grateful for them. Barkley is so sweet and is fitting in so well with our little family. He has found his fur-ever home.

I can’t wait to give you more updates. We’re hoping for good news on the SDMA levels.

Thank you again WestieMed for all your help!!

Barkley has now been with us two months and he has settled in very nicely. He has flourished and his appearance has improved 100%.

Last time, I mentioned that Barkley’s SDMA levels were out of range which could mean early kidney disease.  Dr. Nelson wanted to redo the test after Barkley had settled in because stress could also cause his levels to be off.

We had new bloodwork done last week and though his SDMA levels improved greatly, now his B.U.N levels were not in the normal range.

That too could mean early kidney disease so she had me collect a urine sample to check his urine concentration. I must say, that was a site. Me chasing Barkley at 6 am in the back yard trying to catch his pee.

Unfortunately, his urine concentration numbers were not where they needed to be so Dr. Nelson spoke with specialist and I am sad to say that Barkley has been diagnosed with early kidney disease.

The good news is, we caught it very early so no major damage to his kidneys has occurred.

We are starting him on a prescription kidney-friendly food ASAP (Hills K/D.) to help prevent any future damage. We have to stay away from a high protein diet because it’s hard on kidneys according to the vet. Dr. Nelson says since we caught it very early, diet changes and monitoring will add years to his life.

We have all fallen in love with Barkley in these 2 short months and want to make sure he’s around a long time.

We hope to keep him healthy for a long time.

Just look at that face!!  He looks so happy.

Because of his early kidney disease diagnosis, I now cook him a low phosphorus food and he loves it. He’s lost 3 lbs. which makes his vet happy.

He recently had his urine concentration checked and our vet was very happy with his numbers. He said what I’m doing is working great and no medication is needed at this time.

He’s a funny little guy. He wants outside constantly. He goes in and out just like a kid. He loves to explore the rock wall in our backyard looking for any varmints. Our thirteen-year-old female Westie Chloe finally accepted him fully into the family. No more cold shoulder.

He’s a very early riser!! He wants to be fed at 5 am sharp. He’s very loving but if you move him over in the middle of the night while he’s sleeping he’s a grumpy old man and grunts at you. He usually has his own bed but since my husband is working out of town for a few weeks he wants to sleep in my bed with my other Westie Chloe and me. If my granddaughter spends the night he likes to snuggle up to her.

He loves to play with his toys. After breakfast, b he runs back in the bedroom and throws his toys around and chases them. We are so happy he’s doing so well.

We recently had the opportunity to adopt a Westie puppy from another owner who used the same vet. She was gifted two puppies but it was too much for her. Our vet asked if we wanted another Westie. I said that I was looking for one for my granddaughter, so my oldest daughter adopted the male. His name is Waffles. I put the owner in touch with Missouri Westie Rescue to help rehome the female. Waffles comes over to visit and Barkley and Chloe are tolerating him. He’s got a lot of energy so they let him know when they’ve had enough.

Barkley has been such a joy and we love having him. I’m his 4th owner but definitely his last!!!

Thanks again for all your support.