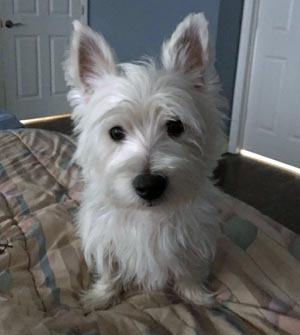 Chevy was owner surrendered to Westie Rescue of Western PA a couple of days after Christmas 2017 when he became jealous of a new baby.

I was made aware that Chevy needed to go to the vet right away because he was sick.  He was urinating blood and had blood in feces.   We also became aware that Chevy needed all vaccinations and neutering.  The meds were immediately given, but neutering would be done when he was healthy.  We also had blood work done, urine analysis and feces tested.  It revealed that Chevy had a urine infection, ear infection, allergies, and Lyme disease.  After the vet visit, his world would begin with love and attention.  Westie Rescue of Western PA covered all the costs for the vet visits and meds.

I find Chevy to be a very sweet and loving Westie.  He loves to snuggle next to me on the couch, with his head on my lap.  He follows me everywhere.  He loves when I scratch his head or rub his belly.

I can tell he is happy – happy to be part of a family who cares for him with meals, treats and meds.  He just wants to be loved by a person.  Unfortunately, Chevy does not play with toys, except when he wants to crunch a water bottle.

Currently, Chevy has someone interested in adopting him.  But, Chevy needs to have surgery for a luxating patella.  We contacted WestieMed and applied for help to cover the surgery. Thankfully WestieMed will pay for the surgery.  Westie Rescue of Western PA is extremely grateful.

We know the future for Chevy is bright, with the help of people who love our sweet Westies unconditionally.

Westie Rescue of Western PA wants to thank you all so much for the generous donation towards the medical expenses for our rescue Chevy. The surgery of Chevy was successful and he is on the road to recovery. We truly appreciate your compassion and empathy for our little white dogs.

Chevy is doing great.  The new owners took him to the vet recently and he got a clean bill of health.

The new owners said they would send pictures, still waiting. I will send you a picture when I get one.

Many, many thanks to you all in helping Chevy. Will keep in touch.Linda Martino

In addition, his previous owners did not protect him from fleas and tics; as a result, he got Lyme disease. He required a leg operation due to the damage caused by Lyme disease.

Westie Rescue paid for his operation and it was a complete success.  He went to our vet on July 3rd and got a clean health report.  He now goes everywhere with us, including some restaurants.

He is a dear, sweet, little boy who sleeps in our bed and loves his freedom.  Chevy is our 2nd rescue.