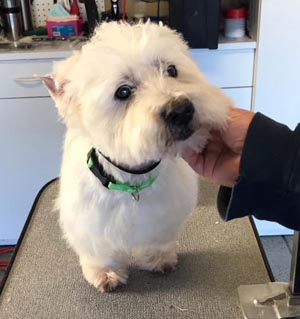 Angus came to Westie Rescue of Northern California (WRAP) from a northern California shelter on 12/2/2017 after several people contacted us on Facebook about him. Angus was a stray, that the shelter said was about ten years old. Angus was fairly blind only seeing some shadows with cataracts in both eyes. His dental condition was poor. He had early renal disease and was mildly anemic. In addition, he was hard of hearing and had ulcers in his eyes which were discovered later. As the WRAP volunteer was sitting in her car to leave the shelter, Angus began to throw up. That set the tone for the weeks to come. He didn’t want to eat and when he did he was sick.

Angus was very dirty and matted on arrival so he was groomed within days. He looked beautiful when done. Angus was a very good boy for the groomer.

His loving foster mother took him to the Veterinarian almost immediately (and often) to start to deal with his medical issues which were many but most importantly his nausea. Multiple labs and testing over the next months were done along with teeth cleaning. He saw three different Veterinarians (including an Ophthalmologist) over four and a half months for various issues.

Angus was a loving boy who had clearly been loved at one time. He got along well with the others dogs in the foster home and became very bonded with them and his foster mom. Angus blossomed with some love and medical care. After over four and a half months Angus was finally cleared for adoption.

Thank you WestieMed for helping us provide for Angus.

Angus, my little man of the house went to Rainbow Bridge on Thursday, November 1st, 2018. We knew he was going to be a tough case because he was very ill when he first came to rescue and us. In spite, of his poor beginnings, Angus was a very sweet boy, enjoying his time snuffling around in the yard, lending affection whenever and wherever he could, and enjoying his food.

We think he was about twelve but he had had a very hard life and ultimately his kidneys failed him. Though he was blind and deaf, he really did manage to get around just fine and would meet me at the door with the rest of his pup siblings.

He was a beautiful little Westie and had the most expressive tail. A great lover of cuddling, he just loved to be around others and made friends easily with the rest of my crew. I love my girl Westie dearly, but oh how those little boys break my heart every time. Angus will be greatly missed.