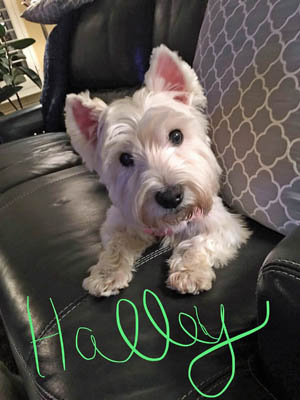 Halley’s story began in August 2018 when she joined Lone Star Westie Rescue. Her human mom had become ill and could no longer take care of Halley and her housemate Gracie. There was really no place for them to go so the family contacted LSWR and we welcomed them with open arms.

Upon her arrival, Halley went to Josey Ranch Pet Hospital for her initial exam. Halley was a little underweight, suffered from skin infections, hookworms and needed a dental. Her right eye had an ulcer and caused some concern and our vet suggested an exam with the veterinary ophthalmology specialist. She started her eye medicines and settled in beautifully in her foster home. She loved her new routine and was especially fond of her foster and resident Westie friends.

Halley needed to gain some weight and be on antibiotics before we could proceed with her dental. Her dental exam date arrived but it was postponed because her bloodwork proved her protein levels were too low and other alarming factors caused her dental to be delayed. Halley’s foster mom, Ann Loggins, dedicated and gave Halley all the care she needed and a few weeks later Halley was finally cleared to have her dental.

In the meantime, her eye was responding to the eye medicines for her eye ulcer while we waited for her upcoming ophthalmology specialist appointment. On September 4, 2018, Halley awoke with her right eye closed shut and she was rushed to our vet Dr. Baber and she quickly called Dr. Kenneth Pierce (Veterinary Eye institute) to alert him that Halley had a future appointment but that she needed to be seen that day.

Dr. Kenneth Pierce diagnosed Halley with a corneal ulceration which, if not treated correctly and quickly, can lead to blindness and even loss of the eye. Her ulcer had healed but the cornea was very thin and weak. Dr. Pierce recommended a Conjunctival Pedicle Graft Surgery (CGS) sooner rather than later. He stated Halley’s eye could rupture at any time, for any reason. Our options were to save the eye or remove it. He said Halley needed to wear a cone at all times and to make a decision very quickly as to which route LSWR would take We had to move fast, to save her eye because with Halley being her own donor, the surgery had a better outcome. She had surgery on Friday 9/7/18.

Recap of this surgery is a strip of her own eyelid tissue would be removed from her right eye (bad eye) and the live tissue “patch” would be partially layered over her eyeball. The strip would be a considerable size. He believed Halley was an excellent candidate for this surgery with very good results. Even with this surgery, Halley would be visually compromised similar to a human having a blind spot in the eye. You can’t see through your blind spot but can see around the “patch”. LSWR agreed to save her eye and proceed with the surgery.

Halley’s foster mom, Ann, doted on her and watched every move during Halley’s recovery after the surgery. Ann was so committed and dedicated to her after surgery care that she stayed at home and did not accept any work at all to ensure Halley was cared for. Halley had several post-operative exams and she received excellent rechecks. The conjunctival graft had healed and was well incorporated in her cornea. The peripheral cornea also started to clear as there were less vascularization and edema. Halley will continue to be on two eye meds for the remainder of her life, but we are so happy to report she has a new family. LSWR’s previous adopters, Jim & Teresa, with their Westie Sasha, read her story and just knew Halley was meant to join their family. And they were so right!!