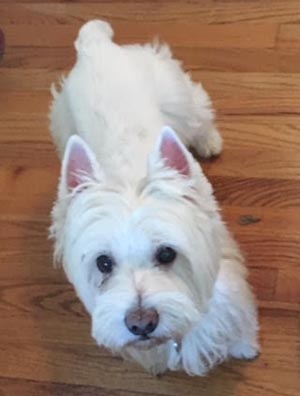 Mattie age eleven years (born 11/30/2006) came into rescue on 1/20/2018 with her nine-year-old sister, Jackie. Their human mother had died the previous Monday after a long illness. The family, at a loss for what to do, put the dogs in a kennel.

The dogs were picked up by Westie Rescue and Placement of Northern California (WRAP) who transported them directly to a veterinarian, in as much as they needed all their shots. Prior medical records indicated that neither girl had any medical issues in the past two years but shots were needed. Mattie was able to receive her shots and heartworm test (which was negative) that day. The girls went to a prearranged adoptive home that evening. It was clear within twenty-four hours both girls were sick. Mattie began throwing up and both girls had diarrhea. Mattie was the sicker of the two and was very thin appearing.

On 1/21/2018 Mattie was taken to the veterinarian. Mattie was thin and we all (adopters, rescue and vet), wanted to try to figure out what was causing her illness. Mattie had blood work done. The vet wanted the girls on a chicken and rice diet to see if that would settle Mattie’s nausea and diarrhea. The diet was unsuccessful and symptoms persisted. Blood work on Mattie indicated some slight elevations but nothing definitive. The vet recommended a urine culture that did show an e-coli infection that was treated. The vet recommended gastrointestinal food and prescribed medications. The vet also wanted an abdominal x-ray to see if there was any obvious issues that might relate to Mattie’s thinness. Nausea and diarrhea cleared up quickly with the gastrointestinal food and medications. On 2/3/2018 the x-ray was done. There were no significant issues found. The vet felt that stress might be a factor in Mattie’s illness. Mattie was also treated for an eye infection.

From the start, it was clear that both the girls had very poor dental care. Their breath was bad and the plaque and tartar was very bad. The teeth desperately needed cleaning and may have been contributing to Mattie’s illness. Mattie’s teeth were cleaned on 2/22/2018. She had six extractions. Mattie is now doing very well in her adoptive forever home with her sister.

Thank you to WestieMed for all their support and assistance in helping rescues to care for sick Westies.