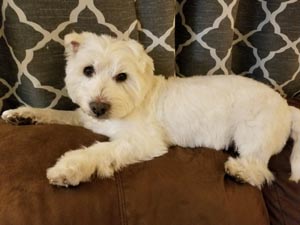 My husband and I knew that we wanted to get a dog as soon as we had a house. So, in September of 2017, after we’d settled into our home, we began searching for our furbaby. Our search took us to a high-traffic, high-kill shelter in Newark, NJ. We were immediately taken in by a little white face. His name, according to the cage, was Travis, and when we took him outside he was calm, gentle, and a great walker on the leash. We knew he was the one. We had to wait until his stray hold was up, but when it was, we went back immediately and filled out the paperwork and waited for them to have him neutered. We added “Sir” to his name because we knew we were going to treat him like nobility!

We brought Sir Travis home that Friday night. He had been in the shelter all week awaiting his neutering, but he kept being rescheduled, and we couldn’t let him languish there any longer. He was curious about his new surroundings, but never seemed nervous or scared. He took to my husband immediately, giving him kisses and following him around. However, we knew something was wrong when he kept shaking his head. We knew we had to take him to the vet in the morning.

Saturday was awful. After a mix-up at a local vet’s office, we wound up at a clinic with a crowded waiting room and a long wait. A few hours after arriving, we got the awful news: not only was he older than we’d been told, but his ears had large growths, one of his testicles was enlarged due to a tumor, and his skin was infected. We were also told he was deaf. This particular veterinarian advised us to bring him back to the shelter and to reconsider if we wanted to invest so much money in an older dog.

We went home absolutely devastated. Even though we’d only had him for a day, we were in love, and our sweet little dog with so much love and gratitude deserved so much more. We resolved to do whatever we could to help him and to seek a second opinion, and whatever the outcome, we were going to show him as much love as we could.

The veterinarian we saw on Monday confirmed the initial diagnosis: he was likely closer to ten years old, and indeed his ears, testicles and skin were in bad shape. However, this vet saw his potential. We started a treatment plan to tackle his immediate problems: multiple ear infections (bacterial, fungal, and yeast), a fungal skin infection, and a very sensitive stomach. The goal was to get him strong enough for surgery to take care of his larger issues.

September was a very challenging month, with many setbacks. Travis wound up with stomach infections, likely untreated from the shelter, resulting in diarrhea and frequent vomiting. At one point, he needed to be hospitalized overnight because he couldn’t keep anything down. We feared for the worst, but he bounced back. His ear infections also proved difficult to treat, and he needed multiple medications to get rid of them. Slowly, though, he gained some weight, grew back his fur, and showed signs of overall improvement. He settled into our home seamlessly, quickly claiming his spot on the couch! Even the vet was surprised by how well he was doing with the treatment. He underwent surgery in early October to be neutered and to remove the largest growths in his ears and the excess skin around his testicular tumor. He made it through with flying colors.

In the months since his surgery, Sir Travis has continued to thrive. His fur is thick and full now, and his stomach issues have resolved, perhaps in part due to no longer being in constant pain and discomfort. We still have to flush his ears each week to keep recurring infections at bay, and he is still almost completely deaf. But looking at him now, you’d never know what he’s has been through. Through it all, he’s been the sweetest, gentlest soul. Even with the constant medical procedures, he’s never shown anything but love, trust, and infinite patience. We’ve learned so much from him, and are looking forward to a lot more time with him!

As a pair of teachers, taking on a surprise special needs dog has been financially daunting for us, but we are incredibly grateful to everyone at WestieMed for helping us with the costs associated with Travis’ treatment and surgery! Your generous grant will help us continue to manage his care and give him the best life we possibly can.