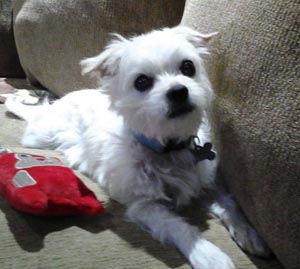 When Hurricane Harvey hit the Texas Gulf Coast late last August, we had no idea what the floodwaters would bring. People and animals lost their homes, and many lost their lives. Some “lucky” ones who did not suffer total loss were either evacuated from their homes or stranded and, as the waters receded and damage assessed, emergency shelters were overcrowded. One of the problems that soon surfaced was the inability of some people to continue to provide for their animals as they pulled their lives back together and Beaumont came from one such situation.

On Sunday, September 3rd, Westie & Scottie Rescue Houston was contacted by a local shelter to ask if we had room for a family of nine Westies surrendered by a local breeder. The breeder’s son had convinced them to give up the dogs because they were unable to take care of them and had been for some time. All nine dogs were filthy, covered in fleas and mange, full of worms, and none had been spayed or neutered. The son told shelter workers that they had been unable to sell the last few litters of puppies so kept them and some had bred together. At least five of the dogs we took in that day were products of inbreeding, including Beaumont.

Beaumont had skin issues that needed to be addressed before we could do surgery for his neuter and hernia repair. Our primary vet had determined Beaumont had cataracts and progressive retinal atrophy, a genetic disease, rendering him completely blind. While we worked to clear his skin infection, we took Beaumont to the eye specialist to determine if there was any way to help him and she ran various tests which showed he had bilateral retinal detachments and no recordable retinal function. There was no surgery that could restore his vision but the eye doctor prescribed eye drops to reduce the inflammation and pressure in his eyes.

As time went by, each of the other pack members met prospective families but Beaumont did not have any interest due to his blindness. Beaumont’s foster mom worked to improve his adoptability by taking him through training classes and he achieved his Canine Good Citizenship certification. When it came time for his six-month visit at the eye doctor, we found that the pressure in his left eye had increased so the decision was made to surgically remove the eye to eliminate his pain and the need for ongoing medication.

Beaumont is a healthy, happy dog who does not seem to know he cannot see. The surgery and care obtained with WestieMed’s assistance will definitely improve the quality of his life.

Shortly after relocating to Houston in Aug of 2017 I began volunteering with WSRH, a wonderful organization dedicated to rescuing, rehabilitating and rehoming Westie, Scottie, Cairn and special blend terriers.  Hurricane Harvey had devastated the area, countless pets had been lost or left behind in a desperate and tragic situation.  A group of nine young Westies came into WSRH, thereafter known as The Harvey 9.  In sad shape, with open skin wounds, patchy balding and one little guy blind, the result of backyard breeders.  All were named for cities in Texas affected by Hurricane Harvey.  Eight of the pups were brought to good health and adopted.

Sadly, Beaumont remained.  He’d been seen by eye specialists, but, there was nothing to be done for his blindness.  I took him home to foster and mentor with my fifteen-year-old semi-retired Cairn terrier, Miss Ellie, a therapy dog. Though Ellie passed shortly after his arrival he maintained his enthusiasm for learning and completed obedience school.

In March of this year during a routine eye exam, it was found that the pressure in one of his eyes was at fifty with the normal pressure being fifteen.  He had had a bleed in that eye and was undoubtedly having pain though he maintained his stoicism. Insult to injury his eye would need to be removed.  The dedication of WestieMed to the welfare and health of Westies cannot be lauded loudly enough!   Beaumont is a different little dog after recovery, free of pain and eager to plow into every day with abandon and blind joy! Thank you, thank you, thank you!