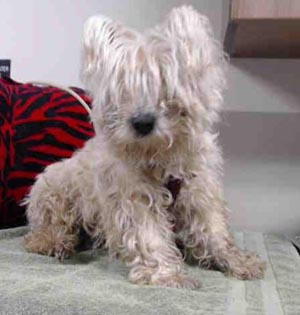 Davey is a 14-year-old Westie that came to the shelter at the request of the police due to gross neglect. We called every day for 6 weeks to inquire about his possible release date.  We were desperate to get him to WROC knowing that a little senior boy of his age would fail to thrive in the shelter environment.

Unfortunately, animals are legally classified as property in the United States, therefore Davey was being held as “evidence”. Our wish finally came true when an officer from the shelter called us on a Tuesday morning, May 8th.  The officer handed Davey over to us that very afternoon with tears in his eyes.

Davey was taken to our vet immediately where he was treated for ear and eye infection, received a complete blood panel, clipped his extraordinarily long nails that curled inward making it very difficult to walk, and we scheduled a dental for later in the week.  Davey would nip when anyone would get near his mouth so we knew he had a lot of issues going on with his teeth.

We took him home, bathed and shaved out all of his mats, including rock hard feces stuck in between his pads. This was very stressful for him and he was given many breaks throughout the ordeal.

He later received his dental where fifteen abscessed teeth were removed. We were shocked that all fifteen were accessed and worried about his dental recovery. A mass was also found in his mouth which was removed and sent out for biopsy. Davey has five teeth left. The rest must have fallen out at one point.

He is now receiving antibiotics, anti-inflammatories and immune building supplements and his skin have improved quite a bit from the sores the mats left behind.

We were in for a huge surprise! In just one week in foster care, he is recovering beautifully and his personality is really beginning to shine. He no longer nips when we touch his head or mouth. His recovery is something to behold. Davey is happy and we are so grateful we got him when we did so we could treat the pain his infections caused. He is turning into a very happy dog!

We knew we would have very little interest in Davey due to his age but that would never stop us from helping a senior boy. Davey is officially a WROC Forever Foster dog, and making that decision was not a hard one to make at all. Being deaf with limited eyesight, we felt it was in his best interest to stay with us since he had been through so much. This little fellow loves to be loved, eats like a horse and snores like a lumberjack. He is gentle, feisty, grumpy, loving, and quite bossy. Our favorite kind!