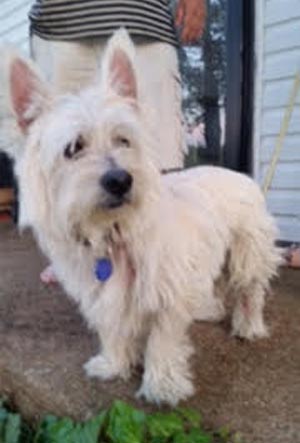 I would like to share our story of how this little monster rescued us. My name is Scott and my girlfriend is Millie. We were out on a little road trip on a Saturday afternoon and decided to stop by a local rescue shelter. While we just walked around “window shopping”, I noticed Millie was nowhere around.

The shelter employee and I went looking for her and we found her kneeling down at one of the kennels getting friendly with this little white monster you see here. I quickly told her, “We are not getting a little dog” as she used to raise Boxers and I raised Akitas.

Well, to make a long story short as possible, Kobi now owns us.

His first daddy passed in November and his children surrendered Kobi to the Open Door Animal Sanctuary in early December. He came to live with us in February. We quickly found out these little monsters have a lot of health issues that have to be addressed.

Millie went online trying to figure out what to do and she found WestieMed, Inc. After multiple emails back and forth, they were the saving grace.

With all his issues, I was concerned about the vet to pick as Kobi’s new doctor.  We got lucky and a vet from Animal Medical Center in Park Hills, MO, which is about an hour and a half from our home, came to volunteer at Open Door. Dr. Harding is a specialist with Westies and owns them as well.

She wanted us to bring him by Open Door so she could take a look at Kobi. After about thirty minutes of looking him over, she told us what needed to be addressed. We had been doing everything we knew to do but she filled in the blanks.

The last thing we wanted was to surrender Kobi back to the rescue shelter. I know his skin condition is not as bad as some, as you can see in these “before” pictures. We got lucky finding people who helped us take the needed steps.

Thank you to Dr. Harding, Open Door Animal Sanctuary, and especially to WestieMed to not only give Kobi his forever home but to give us one great little monster.  We will send “after” pictures soon.