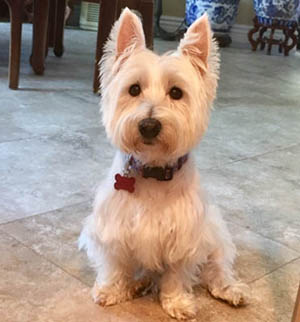 Missy was found wandering on a golf course in coyote country by a Good Samaritan.  She had no identification or collar, so they took her to the shelter.  She was microchipped and the shelter called the owner.

The owner stated he did not want the dog back.  Because of her multiple issues, a huge growth on her inner thigh, mammary tumors, and bleeding from the rectum, the shelter deemed her unadoptable.

They called Westie Rescue of Orange County (WROC) as a last resort and, of course, we took her.

The growth turned out to be a giant wart, the mammary tumors were fatty tumors, and the bleeding was caused by a non-cancerous polyp.  Our vet removed the wart, fatty tumors and the polyp which took 3 surgeries.  Missy never complained and remained her happy sweet self.  She has recovered beautifully and is now available for adoption.

Thank you for your consideration.

Missy learned that life is full of wonderful second chances. She was adopted by a lovely couple and they think she is lovely, too. Missy found a new beginning and a great Mom who tells us they are honored to have a girl like her join their family. We are all so happy!

Missy continues to thrive with her family. She is a very happy girl and they love her to pieces.