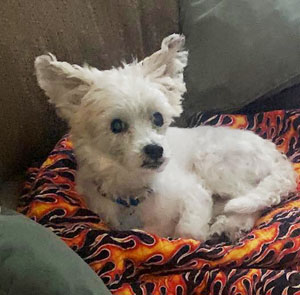 My son, now eleven, has been asking for a dog of his own since he was around five years old. I work at the same elementary school my son attends and during school breaks we would house and pet sit. Being a single mom with a small child it wasn’t the right time to have our own pet. But, we had so many pets to love, play with, and care for in and around our neighborhood. Less than a year ago, a client referred me to a friend of theirs who needed a pet sitter for their two purebred Westie puppies – brother and sister. It was love at first sight! From then on the only dog my son would ask for is a West Highland White Terrier. I started shifting my no to a maybe. When school let out last summer, I made a deal with my son: if he helped me with feeding, walking/running, grooming, playing, etc. with pets – without complaint – during the summer to show he’s up for the responsibility of a dog we would adopt one. He stuck to it… and it was a busy summer! End of July we started researching breeds that would best fit our lives and Westies were on the list. Yay!!

The 3rd visit at Bradshaw Shelter we saw him. He was in a little room overcrowded with other small dogs. We stared at him and he was staring at us. He wasn’t ready, though, since he was a stray and the shelter had to do their due diligence. Aug 6th was his available date and I was there before the shelter opened, my son was visiting family out of town. The volunteer announced his number and asked if anyone else was there to meet him. A few raised hands. There was a lottery…and I WON! I go meet him, and I knew the moment he came in: he was our dog. I knew it was going to be a rough road at first. He was matted all over, flea dirt all over, paws were raw, and you could feel every bone in his body he was so skinny. And, he was at least 5 years old and not neutered. We picked him up Friday, Aug 9th, the day he was neutered. We barely slept that weekend and the following week, and many more nights to follow. Poor guy was so hungry but would throw up after he ate, had diarrhea all day. He was in pain from surgery (it took about three weeks to heal), had kennel cough and had to take antibiotics. The antibiotics also helped with his paws, but they were still a bit raw. To try to prevent further infection, he received a shot of Cytopoint in hopes he wouldn’t be so itchy and stop chewing on his paws. It helped very much, and his paws look so much better! The diarrhea continued for weeks. Then, when it stopped, he was extremely constipated. He would moan and couldn’t get comfortable. Couldn’t sleep, licked his sides, and wasn’t himself. After normal blood tests, x-rays, meds, and fluids I decided to have the vet administer an enema to give him some relief. He was so happy. Now he is eating better, but still has a ways to go. Food and environmental allergies are a focus as well. Judging by the length of his matted fur when we met, he was probably homeless for a long time. I love seeing him happy, and I cannot imagine life without him. He is on his way to living his best life!