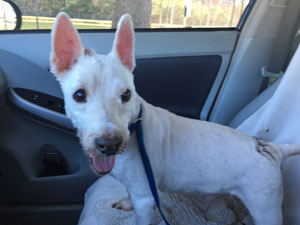 On November 24, 2019, a severely neglected white dog, tinged with brown fur from the filth and grime of the elements, was found by animal control, wandering as a stray, in the streets of Orlando, Florida. Upon intake into Orange County Animal Services, a high kill shelter, the county vet was unable to perform the necessary examination of him, due to severe matting, so the shelter groomer was tasked with completing a total shave down of him. It was at this time, the shelter staff became aware of the oozing golf ball-sized tumors he has on his head and back, along with about thirty other smaller tumors, of various sizes all over his body. Sadly, he was still put on the general floor for adoption, even in this poor condition; and, to add insult to injury, none of the shelter staff was aware this little guy was a Westie! After being at the shelter, for twelve days, the rescue coordinator finally released him for rescue, at which point a local rescue accepted him under their rescue umbrella, with my husband and I being contacted requesting us to accept and care for him, as a foster.

On December 6, 2019, he exited the shelter as a happy, alert dog, with severe kennel cough, which proceeded to pneumonia. After almost forty-five days of continuous care for the pneumonia, he is almost completely recovered, and we finally are seeing him have a zest for life, wanting to play with his foster brother and sisters, with a tail that seems to almost always be wagging. Since his arrival to our home, he has been under constant vet care, with us becoming aware that he is aged closer to ten years, versus the six years that the county vet had estimated him to be. Per labs, he has elevated liver enzymes, but thankfully he does not have Cushings. As we are unsure of the nature of the tumors, as well as to the cause of the elevation to his liver enzymes, we are not sure if he will be a candidate for adoption; however, my husband and I have committed to him, for the duration of his life, for however long that may be.

Thanks to the assistance of WestieMed, and its supporters, he can have the surgery to remove the tumors, as well as for a dental with extractions. Additionally, he will be seen by a specialist for an ultrasound of his liver and gallbladder, as well as for a bile acids test, and a complete liver profile. His allergy issues will also be addressed.

We know each rescue dog has a story to tell, and we are hopeful that the ending chapters to McDuff’s book will be full of only happy memories, with the sense of security that comes from having a family that loves him unconditionally, and from being blessed to have caring people, like those of WestieMed, offer their kindness and support in his time of need.
Mina

Just wanted to let you know that McDuff had the tumor on the top of his head removed yesterday, under local anesthesia. The decision to use local versus general was sole because of the recovery period needed for his lungs after getting over pneumonia; however, since the tumor kept getting infected it becomes imperative that it be removed as soon as possible. Already, he feels so much better. Now comes the wait to find out the pathology results. Fingers crossed it is non-cancerous!

He is such a sweet boy that I want to be able to watch him chase the squirrels for many springs to come; to run the beaches in the summer months; and, to chase the lure on the dogs monthly outings to the lure line events.

This was for sure a major life changing event in his life: One we could never have accomplished without the assistance of WestieMed! We are so appreciative of your groups help in giving McDuff this chance to finally have all his medicals addressed.

Next major event for him is March 23, 2020, when he will have the dental with extractions, as well as more tumors removed – all those will be done under general anesthesia. Oh, and I wanted to let you know that he is now known as McDuff Johnson! We could not imagine sending him back to the rescue that pulled him, for many reasons, but the main one being that we love him!

Hugs to you!
Mina

I have some wonderful news to share with you on McDuff. The tumor on his head is NON-cancerous — we are so happy! It ended up being a Basal Cell Tumor (trichoblastoma).

So, end of next month he has the dental and hopefully the rest of all these tumors removed. The one on the back is back to draining. But, he was paid a huge complement today by someone that could not believe he is the same dog. He is so happy, and very energetic now.

Only other issue is his breathing, which we hope will continue to improve over the next month.

We are not having wheezing, just some coughing when pressure from the harness is present. He also is a snorer.

McDuff has had a long road to recovery due to having pneumonia. He has undergone one surgery for the removal of a tumor on his head, as well as just a second surgery for a dental and tumor removal. He will hopefully be available for adoption soon, under the care of our state’s breed-specific rescue: Sunshine State Westie Rescue, which he has been transferred from me to them to ensure he goes to a Westie specific household.

McDuff was transferred to us from Mina Johnson, on May 26, 2020. One June 22, he went into surgery to have the dental done and two growths removed. We are currently screening applications for his placement. I needed to wait for the biopsy results to come back before we actually make any choice. The great news we got is that the mass that was the biggest concern that was on his back, was benign and the second mass was on/in his ear. He is recovering well from the procedures. He’s a funny and sweet boy and I don’t think there will be any problem finding him a great home.

McDuff was transferred to us from Mina Johnson, on May 26, 2020. On June 22, he went into surgery to have the dental done and two growths removed. We are currently screening applications for his placement. I needed to wait for the biopsy results to come back before we actually make any choice. The great news we got is that the mass that was the biggest concern that was on his back, was benign and the second mass was on/in his ear. He is recovering well from the procedures. He’s a funny and sweet boy and I don’t think there will be any problem finding him a great home.

I wish I had a better update for you. McDuff was given serious medical care, including another $1000 we put in on top of your generous $2500 for his medical care. We had an ugly tumor removed and another suspicious one also and biopsied to be sure it wasn’t anything to be concerned about. They were negative and he was ready for his new home. He was adopted by an amazing couple who loved him unconditionally. Unfortunately, two weeks into his adoption, he suddenly became very ill. After all the tests the vet believed he had a blockage of some kind. He went into emergency surgery and what they found was that he had a tumor in his stomach and it had metastasized into other organs. He showed no signs and lived a great life right up until the last couple of days. When they were advised by the vet how bad it was, they decided he should not, could not suffer. He went to the bridge on July 31, 20. Sorry for the bad news.