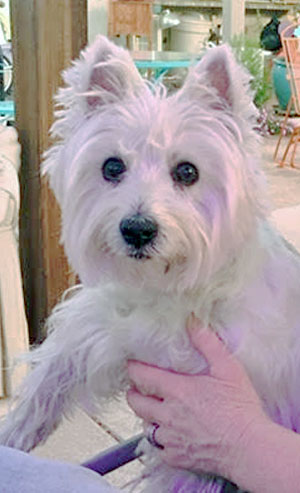 On March 2nd I was looking at the Next Door App on my phone when I saw a listing for a sweet girl who needed a new home due to the death of her owner. The listing stated she rescued about six years ago, and at that time her age was approximately two years of age. The listing didn’t mention what breed of dog Molly was, but she was definitely a Westie.

I immediately contacted the family member who had Molly and arranged to meet her the following morning at a park near our homes. We had two Westie’s, (Finley and Moxie) and wanted to make sure that the dogs all got along. All three dogs got along well during their initial meet and greet.

There was another individual who had expressed interest in Molly and would be meeting her later that same day. Later that evening we received a call that we were chosen to be Molly’s new family. Arrangements were made to pickup Molly the following morning and take her to our vet for a physical.

When we first met Molly, we were told that her age was closer to 10 years. We were also told that she had an abnormal toe on her right front toe and hoped that we still wanted her. Molly was also on the larger size, close to twenty-two pounds. We told her of course, we still wanted Molly, and her toe issue appeared to have been present for many years due to the fact that the entire toe tail had grown out abnormally thick.

Molly came to us with a packet of her records and personal items. The records indicated that she initially was found with a male Westie in Missouri. She had been rescued together with the male Westie, Mac, and they both moved to Phoenix Arizona many years later.

Our Veterinarian examined Molly and then her abnormal toe.  He told us that the toe growth had been there for quite a while, due to the changes in the joint and nail. Molly didn’t appear to have any pain in the joint and the skin was intact and didn’t show any signs that she licked or chewed at it. He provided us with an estimate to amputate the toe if there were any changes to this toe.

Molly adjusted well into our family. She is a very sweet girl. She likes to talk to us in a very low voice. She also gets down low to the ground and crawls to us when she’s happy.

Late November of 2019, Molly started limping and not putting any weight on her right rear leg. Our regular veterinarian diagnosed her with a torn cruciate ligament, and referred us to an orthopedic specialist.

The orthopedic specialist confirmed that Molly had completely torn her right cruciate ligament. I asked the specialist to look at Molly’s abnormal right front toe. The orthopedic specialist recommended x-rays of both Molly’s right knee, and right front foot. After the x-rays were taken, the doctor was very concerned about the x-ray of Molly’s foot and toe. The x-ray showed extensive destruction to the joint of Molly’s toe, and could possibly be a type of cancer. Molly’s toe needed to be amputated before we could proceed on treatment of her torn cruciate ligament.

Molly had her toe amputated in early December. She did amazing after the surgery and the surgery site has healed perfectly. The pathology came back as a benign cyst! The Vet even called and spoke to the pathologist two times to make sure due to the x-ray and the destructive nature of the growth.

We have decided to treat Molly’s torn cruciate ligament with physical therapy, and pain management.

Molly is the sixth Westie that I have had the privilege of welcoming into my home. The first Westie I got when I was in college!

I can’t say that I own a Westie, because they definitely own me!

I am a member of many different groups for Westie Lovers on Facebook and initially learned about WestieMed through a fundraising auction on one of the Westie Pages. I have bought auction items that supported Westie Med. I never thought that I would be the one in need, but my husband lost his job over two years ago and our finances have been extremely tight.

I am grateful that WestieMed has helped with Molly’s amputation surgery. And that they are there to help other rescued and or adopted Westie’s that are in similar situations.

Molly is doing great!!
She’s such a lovely senior Westie!
After her surgery, the amputation site healed perfectly.
Molly loves car rides and treats, too.
Hoping to see if she like to swim in our pool this summer.

Molly is thriving!! Such a sweet senior girl.
Molly is on the left in the picture.
Thanks again for helping us in her time of need.