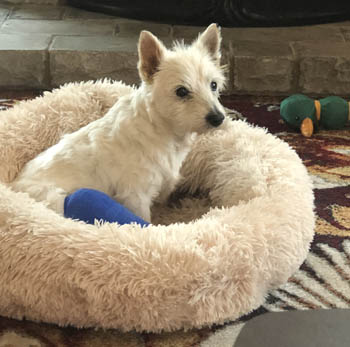 Fiona was found in North Carolina and taken to an animal shelter. Due to her poor condition, she was taken to a veterinary hospital, where she stayed for a week.

During this time, no one contacted the shelter and no owners were identified. After their specified hold time, she was released to Westie Rescue Southeast for further care. She was found to be deaf, anemic, malnourished and with a heart murmur.

I adopted Fiona on 11/22/20. I was in Maryland at the time, caring for my sister after she had surgery. As Fiona’s foster family was in North Carolina, we met in Virginia for the handoff. Fiona remained with me at my sister’s home for the week. She got along fine with other animals, mostly steering clear of them.

On the afternoon of Thanksgiving, 11/26/20, she fell down 4-5 carpeted stairs she had been able to traverse without difficulty on prior days. She remained sitting very still at the bottom of the steps. I did not witness the fall. I picked her up and she would not allow me to touch her back right leg, screaming when I tried to do so. She held it up and was non weightbearing.

I immediately took her to an emergency animal hospital in Rockville, Maryland. She was found to have a nondisplaced fractured right tibia. There was concern that her bradycardia (found to be 70-90s at the vet office, but during prior exams had been as low as 40), would require caution with sedation to splint/cast the leg.

My plan was to return home to Ohio the next day. To minimize risk of complications, Fiona was discharged without splinting and with pain medications to return to Ohio on 11/27/20 (Friday). I contacted my vet in Cincinnati, but they could not accommodate sedating her and proper monitoring that day, so I chose to take her to an emergency vet in Cincinnati. Upon reviewing the xrays from the vet in Rockville, this vet found concern that a bone tumor may be present, as the result of the fall seemed more traumatic than the described fall. (As I said, I did not witness the fall, but another person did, they felt Fiona was started and fell).

After more xrays, any bone abnormality was ruled out and the leg was placed in a splint. Fiona’s prognosis is good for a full recovery of her leg. Limited activity is easy to maintain, as she continues to recover from her general deconditioned state she was found in. Fiona’s leg is expected to heal in 6-8 weeks.