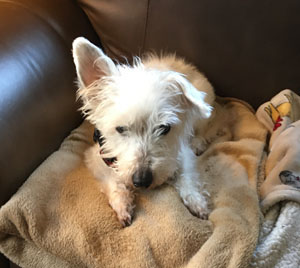 On June 16, 2019, we lost our Sweet Bella to Westie Lung Disease after only having her for sixteen months. Bella, who was nine when we received her, had quite the history and was not a healthy little girl at all. My husband and I decided that we would not rescue another elderly or really ill dog as it broke our hearts.

In August, my husband received a phone call from North Atlantic Westie Rescue where we adopted our Neko, a male rescue. Neko came to us in July of 2018 and was a healthy nine-year-old Westie. The phone call was inquiring if we would be interested in fostering a fifteen-year-old male named Dagwood. Dagwood had been found wandering the streets of Brooklyn, New York. After a few days, we had decided that it would just be too painful. Then the one last phone call made us think about it and we thought what do we have to lose with just fostering him. We were told that he was a happy boy and just wanted to hang with his people.

We met and picked up Dagwood on September 9th and it was love on first sight. Dagwood was just the happiest, sweetest little guy. Dagwood got along well with Neko and let him think he was the Big Brother. They got along well and within hours, Dagwood aka Dagger had stolen our hearts. After a vet visit and finding that he was in good shape for fifteen, we decided to adopt Dagger.

On March 11th, I woke up to him having very distressed breathing and got him to vet the same day. After lab work and x-rays, it was determined that Dagger had Westie Lung Disease. We got him started on the Prednisone and hoped for the best.

It breaks my heart to say that we lost Dagger on March 18th. Dagger was with us for a reason and we have no doubt that we gave him a great 6 months. Just two weeks before he passed, he went with us down to the beach for a few days and he was so happy.

We will not regret having adopted Dagger as he brought us so much joy in the six months that he was with us. We miss him terribly.