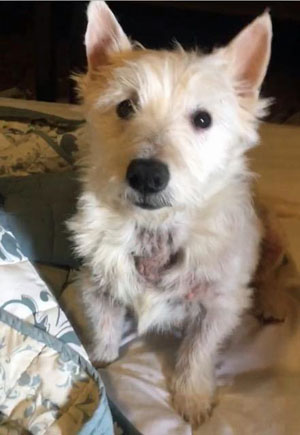 My beloved 14-year-old Westie Baxter passed on Christmas Eve, 2019. He was my first Westie and he fought a long hard battle with Westie Lung Disease. It was a devastating loss for me. Baxter was the last of my three dogs. Lexie was a Corgi and my first, then along came Wiley a mixed breed, and finally, Baxter came into my life. Both Lexie and Wiley passed away in 2016 leaving just Baxter and myself and we bonded very closely for the next 4 years. Christmas was very hard and to wake up without my faithful friend Baxter was so hard to get through. It was the first time in 15 years I didn’t have dogs around me and it was an extremely empty feeling. Christmas came and went and each day that passed was harder and harder without Baxter. I determined that although each person is different in how much time they need to process and accept a loss, I determined for me personally I needed a dog sooner rather than later and so many are in need of help.

I learned from my good friend Michele that a little white Westie was found in Kansas, wondering alone and out in the middle of nowhere near an Indian Reservation. He was in bad shape and covered in yeast and mange. He we very underweight. The person who found him brought him to the nearest Animal shelter many miles away. He underwent emergency evaluation and care. They helped him get stabilized and attempted to locate his owners. They even advertised that he had been found. No one claimed him. Many shelters can only give dogs so much time before they must make room others. Luckily, the shelter knew a true a Westie Warrior based in Kansas named Penny Reames of Northern New England Westie Rescue. They called her and told her about this amazing Westie that was found. Penny went directly there and took one look at him and knew she had to take him to her rescue which helps Westies from Kansas area out of bad situations like auctions and puppy mills then transports them to New England for permanent homes. Michele and Penney are friends and through them I was presented with the opportunity to have an amazing Westie that was named Journey! Penny named him that as no one knew what this little dog’s actual journey was. He was feisty like my Lexie. Found wondering covered in mange, like my Wiley, and he had a sweet loving spark in his eyes like my Baxter. After seeing Journey’s picture, I knew I had to have him and to help him. I felt very good vibes and signs from all of my three dogs that Journey should be mine.

Journey came into my life on February 10, 2020 and I picked him up in New Hampshire after his transport from Kansas. I entered the rescue with Michele with me and Journey ran right past her and everyone else and jumped right into my arms and couldn’t get enough of me! Everyone was shocked as it was like our destiny was sealed. When Journey entered my house it felt like my 3 dogs had a divine conversation with him prior to his arrival. He knew where everything was, jumped right up on the sofa with a toy and made himself right at home as if he had been living with me all along. He was so well mannered and housebroken but just a little rough around the edges in his play which was a bit rough. He quickly picked up on what was acceptable and not. Prior to Journey’s arrival I purchased probiotics and immunity boosters and omega 3 oils to help work on his skin and coat. I immediately brought him to my veterinarian for evaluation and skin scrap, blood work and special shampoos. His ears had yeast in them as well and needed to have a good teeth cleaning with a few extractions. It was determined after testing that he also suffers from KCS as his eyes were not producing tears.

Today Journey is showing much improvement with dips twice a week as his hair is starting to grow in. His eyes are now producing tears but he will need lifelong medication to help with that. He loves to go on hikes and long walks and is a very playful and happy little guy. So thankful to Northern New England Westie Rescue for saving Journey and bring him into my life. I am beyond grateful to WestieMed for their generous help towards the much needed care that Journey needed and will continue to need. We thank all the great people at WestieMed for their dedication, love and support for this amazing breed.

I appreciate this group so much but it’s been a long crazy year. Journey just celebrated his 5th birthday , well I am calling him 5 no one really knows his age but most are in agreement 4-6 range. He is doing for the most part really well. I do have him now at a dermatologist and we have created an immunotherapy allergy protocol for him which he just started. It’s pretty expensive but I am determined to do my best for him. I did allergy blood testing and he is allergic to 13 items common to New England. The immunotherapy should help but can take awhile to start to see improvement. He is very itchy at times.  Other than that he is doing well, full of Westie energy and happy. I will enclose a few pics. In July I took another rescue named Willy, he a 14 year old Westie with not much hair, they asked if I would give him a good retirement and since no one wanted him , I couldn’t say no, he is a really great Westie just like Journey.  I hope all is well at WestieMed and thank you all so much for what you do. I will keep you posted on Journey’s progress.

Photo is from his Birthday, which was also the first day he came to me a year ago!