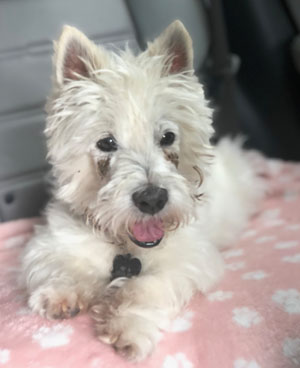 Westie Rescue SouthEast was alerted about Lily from a Veterinarian’s office when she was brought in by a good Samaritan when the owner would not. It was noticed that her eyes were swollen while pet sitting. The vet office contacted Westie Rescue in the event the owner agreed to surrender the dog.

Upon the owner’s return, the sitter mentioned that Lily needed to go to the vet, and was told, “if you think she needs to go, then you take her.” This person graciously did take her in and paid out of pocket. The owners subsequently agreed to release Lily into our care, but not the other dog living in the home.  We hope that eventually, we will be able to help this dog as well.

It was found that Lily had abscessed teeth which were causing the swelling and subsequent rupture under both eyes. There were infections and pain. She was treated with antibiotics and pain medication.

Once we had transport in place, Lily was picked up and transported to our foster home and was immediately seen by the local Vet for assessment. We were told she would need at least six teeth removed, and the remaining teeth would be cleaned. It was also discovered that she had a growth on her side that would need removed as well and possibly biopsied. (When the surgery was done, they did feel like a biopsy was in the best interest of Lily).

Lily is doing well post-surgery in her foster home and is a sweet and loving 14-year-old senior lady. We eagerly await the results of the biopsy and hope that Lily can live a happy, pain-free life in her golden years.